Maine Memory Network
> This Rebellion: Maine and the Civil War

This Rebellion: Maine and the Civil War 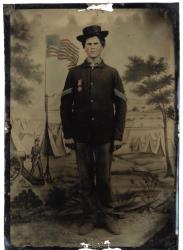 Starting in April 1861 our country was divided by war – an event that affected virtually all people in the North and in the South.

Politics, economics, communities, the landscape and, perhaps most significantly, the fate of many thousands of African-Americans all had altered by the war's end in 1865.

This Rebellion explores the war from and the changes it wrought from an individual level of Mainers involved at home and on the battlefield.

Drawing on a large collection of battlefield relics, letters, photographs, and more, the exhibit follows experiences soldiers may have had beginning with enlistment through outfitting, battles, medical care, contact with relief agencies, and post war organizations.

Soldiers, relief workers, and their families did not forget – and these historical items represent the depth and power of their wartime experience.

Personal expressions and relics alone cannot explain the war, but the items saved and treasured do reveal much about the way individuals experienced it, and, the impact it had on families and communities in Maine.

Captain John Curtis of Brunswick, who often shipped cotton from Southern plantations, was in Mobile in January 1861 when Alabama seceded from the Union.

In a letter to his wife he anticipated the enormity of what was to come. "The tears will start in all good mens eyes when this Rebellion is talked about for a few minuits but it is done and none but god can save it."

His words inspired the title of the exhibit.

This online exhibit is based on an exhibit that was in the Maine Historical Society museum from June 2013 to May 2014. It was part of the the state's Civil War Sesquicentennial "Civil War Trail."

Troops were recruited and soldiers outfitted with clothing and equipment shortly after the Civil War began in April 1861.

Record-keeping and official correspondence were crucial to the war. In addition, soldiers' letters as well as items they saved help tell the stories of their wartime experiences.

Drummers, buglers and fifers -- and bands early in the war -- were crucial to the war effort. Sailors served off the coast of North America as well as in international waters and close to Europe and South America.

Thousands of prisoners on both sides died in prison camps due to overcrowding, disease, and lack of food and clean water. Many Maine women served as nurses at the front and in military hospitals, working alongside military surgeons.

The war came close to Maine's shores a number of times, even as residents carried on business and family obligations -- some in support of the war effort -- and groups organized by women offered aid to soldiers.

Relics collected during the war and brought home and post-war veterans' groups and observances all attest to the importance of the war to participants' lives.