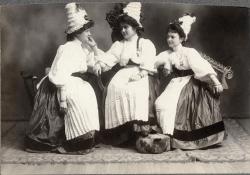 A striking disparity in perceptions of Lewiston -- the grimy mill town vs. the "Athens of New England" -- demonstrates the cultural divide that existed at the end of the 19th century and the beginning of the 20th.

French-Canadians, who were flooding into the city in huge waves of immigration, brought with them a foreign language, religion and culture, which many non French-Canadians under-appreciated, ignored, and even feared and scorned.

Nonetheless, the immigrants developed a great musical and theatrical tradition, even mounting full-scale opera productions, such as Gounod's Faust, before packed audiences.

These textile and shoe workers, carpenters and clerks, doctors and lawyers provided their own French language entertainment to what was becoming the majority of the population. Robert Planquette's popular operetta, Les Cloches de Corneville (The Chimes of Normandy), was first performed in Lewiston in 1896 and last performed as a revival in 1983.

For nearly a century, Lewiston-Auburn's francophone community filled a cultural void in a spectacular fashion by providing regular theatrical production, not only to the anticipation of local audiences, but also to those of other French-speaking areas of central and southern Maine, including Biddeford, Brunswick and Waterville.

With the advent of nationalizing influences such as, silent movies, vaudeville, radio and television, this noble, local theatrical tradition has all but disappeared.