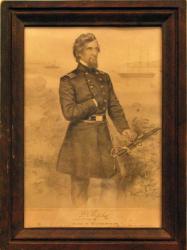 George Foster Shepley (1819-1878), a Portland lawyer and U.S. Attorney for the District of Maine, had dipped his toes in politics before the Civil War began in April 1861. Still, it is unlikely he anticipated the complex political and diplomatic challenges he would encounter through his Civil War service.

As military governor of Louisiana from 1862 to 1864, he had to negotiate New Orleans and Louisiana politics, economics, and social conditions, as well as internal military politics, and the broader political circumstances of the divided nation.

A Democrat like his father, Ether Shepley, a U.S. Senator, member of the Maine Supreme Judicial Court from 1833 to 1855, the younger Shepley was elected to the Maine Senate in 1850 and was a delegate to the divided Democratic National Convention in 1860, where he met fellow lawyer Benjamin Butler of Massachusetts.

Butler, ambitious, more political, and more likely to act outside of orders than Shepley, was brigadier general of Massachusetts volunteers. He believed having Democrats as commanders of Union regiments would strengthen Lincoln and make the war less a "party" affair. Lincoln gave Butler the authority to raise 10 regiments in New England. Butler urged Maine Governor Israel Washburn to appoint Shepley as a colonel and let him recruit a regiment.

On Nov. 21, 1861, George Shepley was commissioned as a colonel in the 12th Maine Infantry Regiment. An1861 recruiting poster that announced "Our Country Calls! We Must Obey!" links Maj. Gen. Butler and Col. George F. Shepley in large letters.

From recruitment to his resignation from the army on July 1, 1865, Shepley was tied to Butler, a controversial figure throughout the war.

Soon after Shepley's 12th Maine arrived at Ship Island, Mississippi, the colonel was given command of the 3rd Brigade. Butler, meanwhile, was put in charge of the new Department of the Gulf in February 1862. 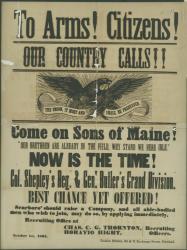 After the Union navy captured New Orleans in March 1862, Butler quickly made enemies of many New Orleans residents, who began referring to him as "Beast" Butler. Shepley was named military commandant of New Orleans, and in June 1862 became military governor of Louisiana, in part to provide a buffer between the residents of Louisiana and Butler.

Butler and his successor in December 1862, Gen. Nathaniel Banks, were the military commanders in the Department of the Gulf. Shepley, who worked closely with both men, was in charge of the administration of the occupied territory, and in ensuring enforcement of the orders they issued.

Both Butler and Banks were closely involved in the administration of the occupied territory. In fact, many histories of that period barely mention Shepley, or if they do, they suggest he was a relatively minor player, dominated by Butler and Banks.

Gerald M. Capers in Occupied City: New Orleans under the Federals suggests Shepley and others were loyal to Butler and, like him, interested especially in the "spoils of office" and to a desire to retain power in the city. No evidence links Shepley to "spoils," even though much evidence links Butler and his brother, Andrew Butler, to war profiteering.

Capers also notes that New Orleans under Butler and Shepley "may have been the most efficient municipal administration the city ever had."

John D. Winters in The Civil War in Louisiana, written in 1963, comments that Butler was successful in having his friend Shepley named military governor and that Shepley "often acted with vehemence and impetuosity, but Butler found him easy to control." He also charges Butler, and hence Shepley, with allowing Northerners to make profits by selling goods to Confederates.

Butler, in his memoirs written in 1892 after Shepley was deceased, barely mentions his Maine ally.

While serving in his administrative posts, Shepley dealt with hundreds of requests from residents seeking passes to leave the area, asking to have levees repaired so their plantations could be protected, seeking funds to operate schools, space to operate hospitals, providing information on Rebel activities, asking to get slaves back, seeking business opportunities, and complaining about policies or decisions – many of which had been made by Shepley's superiors.

The correspondence and visitors he dealt with were not just Louisiana residents. Friends and friends of acquaintances from Maine, Missouri (where Shepley had family), New York, and elsewhere in the North sought his influence – in getting ships into the port of New Orleans and getting permission to deliver and pick up cargos, in getting help for Union troops or their families, in getting positions in the military occupation – and numerous other favors.

Shepley had practiced law in Bangor before moving to Portland and, as U.S. attorney for Maine, he knew numerous people throughout the state and elsewhere, and many of them corresponded with him or asked him for favors during the war. 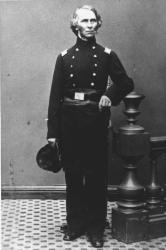 Late in 1863 when Brig. Gen. Neal Dow of Portland and the 13th Maine Regiment was in a Confederate prison in Virginia, he and his son both wrote to Shepley, asking his help in getting Dow's clothing and other goods shipped from Louisiana to Maine.

Some historians who have written about occupied New Orleans saw Shepley as an extension of the disliked (and not particularly skillful general) Benjamin Butler. Some suggest Shepley was obstructionist toward Gen. Banks, Butler's replacement. When Shepley left New Orleans in March 1864 when a civilian government loyal to the Union was elected in Louisiana, he was assigned to the Department of Eastern Virginia, again serving under Butler and under Maj. Gen. Godfrey Weitzel, who also had been in the Department of the Gulf.

But Shepley – and all Union officers and politicians – were caught in a challenging situation. Louisiana had a number of Union loyalists, not all of whom shared the same views about what should happen to slaves, plantations, politics, or most other wartime and postwar issues. In addition, it was never easy to clearly distinguish a Union from a Confederate sympathizer, or to anticipate what their views and actions might be in an occupied city and state.

Shepley, like many other military officers also had to defend himself from various charges of misconduct or unfair treatment. Some were clearly political, such as that apparently made by Dr. Thomas Cottman, a supporter of secession, who tried to get early elections held in Louisiana. Neither Lincoln nor Shepley, who wanted to assure that any election would put those loyal to the Union in charge, would agree. Cottman managed to get "elected" early and was seated temporarily in Congress. He apparently blamed Shepley for his failure and made charges against him.

In addition, though, a number of New Orleans residents praised Shepley for his handling of the military government for two years and of his manner toward the residents and the issues they faced.

Shepley saved correspondence, copies of letters sent and received, and official documents from the 12th Maine Regiment and from his time in Louisiana, Virginia. Few personal letters accompany the official record.

Shepley's nearly four years in the army must have presented many personal challenges as well. He was 42 years old and had been widowed for two years when he enlisted. His three daughters were 15, 11, and 9 and apparently went to St. Louis for at least part of the war to live with Shepley's brother, John R. Shepley, and his wife, Mary, and their children. Shepley's father and mother, Anne Foster Shepley, lived in Portland and may have cared for the girls during part of the war. 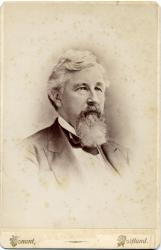 When Shepley returned from military service, he resumed his law practice. He was soon offered a seat on the Supreme Judicial Court, but turned it down. He also had turned down the rank of brevet major general, preferring to keep his active duty rank of brigadier general.

Shepley's life resumed in Portland, but his personal challenges did not. In 1866, his mother died; in 1868, his youngest daughter died at age 16.

In 1869, Shepley was named judge for the newly established First U.S. Circuit Court.

During the presidential election campaign of 1864, Shepley was sought after in Maine and elsewhere as a speaker to talk about the state of the war and about Lincoln. Although he was a Democrat before the war, Shepley became a Republican afterwards and was a frequent speaker at Republican events during the 1868 elections. He had been elected to the Maine Legislature in 1866 as a Republican.

Shepley remarried in May 1872. He and Helen Merrill Shepley, who had been a nurse during the war, were married for six years, when, at age 59 George F. Shepley died "of a disease resembling Asiatic cholera."

Nathan Webb, U.S. District Attorney in Maine, said of Shepley, "His strength seems to grow with the drafts made on it." He called him "conspicuous and influential, distinguished for his eloquence and earnestness."

Shepley's law partner, A.A. Strout said, "His public spirit led him to take an active interest in every enterprise calculated to advance the prosperity of the city, and his generosity embraced every worthy object of public and private charity. He gave freely, but not for applause."

Nathan Clifford, a pro-slavery Democrat, who had served in the Maine House, the U.S. House, as U.S. Attorney General and who served on the U.S. Supreme Court from 1858 until his death in 1881, said of Shepley, "His duties were both civilian and military and in both he manifested great prudence, energy, and ability, which were repeatedly commended throughout the country."