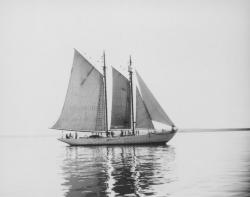 William H. Hand, a naval architect from New Bedford, Massachusetts, designed the Bowdoin to the specifications of Donald MacMillan, her owner and captain for 33 years.

MacMillan had spent several years in the Arctic and was well aware of the conditions his vessel would encounter.

The schooner carries less sail than most, as well as a strong auxiliary engine, because the Arctic is known for either too much or too little wind.

Images from The Peary-MacMillan Arctic Museum

In 2011, the schooner Bowdoin marked her ninetieth year, and she is sailing still. She is unique in both her design and her history--the brainchild of Donald Baxter MacMillan, who owned and sailed her for thirty-three years.

MacMillan had a life-long fascination with the Arctic. In the early 1900s, before ever going north, he was a teacher. In the summers he ran Camp Wychmere, a sailing camp for boys on Bustin’s Island in Casco Bay.

While MacMillan did not stand at the Pole himself, the expedition changed his life. He never returned to classroom teaching, but solidified his resolve to work in the Arctic. 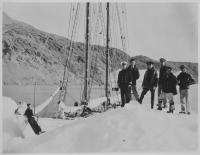 MacMillan explored the uncharted Labrador coast in the summers of 1911 and 1912 by canoe and motorboat. Then, from 1913-1917, he led a six-man expedition to Northwest Greenland and nearby Canadian islands. He chartered the ship Erik to transport crew and supplies to Etah, Northwest Greenland, where they built a lodge as headquarters.

During this intense four-year study of the lands, waters, and native people, MacMillan realized that in order to continue Arctic work, he needed his own vessel.

And so MacMillan conceived the schooner Bowdoin, named after his college. He knew that Arctic sailing conditions required a unique type of vessel. Through the years, the schooner Bowdoin occasionally ran into trouble, but time after time she proved that MacMillan's concepts for her design were sound. Here are highlights of her story . . . so far.