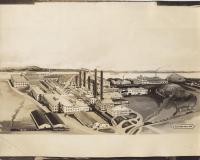 Frederick Wellington Ayer purchased a sawmill located along the Penobscot River in South Brewer in 1884. Five years after Ayer purchased the mill, Eastern Manufacturing was incorporated and in the following year a pulp mill was added to the property. Ayer saw the potential of using the mill's waste to make paper using the sulfite pulp processing system.

The property grew exponentially over time to include many more buildings and employ hundreds of people throughout its history. From this point on the story of the mill is one of growth – until it collapsed in the latter part of the twentieth century. The final closure of the mill in 2005 affected the lives of many Maine people. 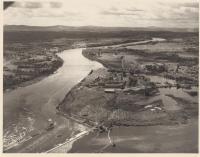 In 1895 Ayer began the construction of a paper making facility that was located next to the pulp mill in order to use the pulp more efficiently. By 1905 Ayer also recognized the demand for paper made from cotton and added a rag mill to the property.

It seems that Ayer was well aware of the money that could be made in the pulp and paper industry in Maine. By 1912 the sawmill Ayer had purchased had grown substantially and he sold Eastern Manufacturing to the Old Colony Trust Company based in Boston, Massachusetts, where it became a publicly traded company.

Although the mill was fairly successful during World War I, the following years were not a time of economic prosperity at the mill. Production had slowed and prices had fallen which caused a decline in wages and caused layoffs, this surely had an effect on the people of the area.

During the interwar years the company expanded its product offerings, which allowed profits to rise, but when the stock market crashed in 1929 not even Eastern Manufacturing was safe from its effects. Even though the economy was in a depression the company was able to purchase the Orono Pulp and Paper Company located in Orono.

This provided Eastern Manufacturing with not only another pulp and paper mill, but also 112,000 acres of timberland. The company could now generate more pulp and paper but the company sold the Orono mill in 1942 when it was no longer profitable for the company. The timberlands, on the other hand, provided necessary resources that Eastern needed in order to maintain or expand the size of its operations.

In 1938 Eastern Manufacturing Company changed its name to Eastern Corporation, and elected a new Board of Directors. In addition, the company created an export department, which provided Eastern with the ability to distribute products to new markets that were critical if the company was going to continue to expand. 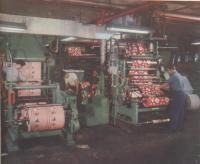 During World War II Eastern Corporation received important government contracts. These contracts lead to an increased demand for Eastern’s products and higher wages for the employees.

The company expanded in November of 1949 when it acquired Royal Lace Paper Works Inc. of Brooklyn, New York, which made fine paper item such as lace doilies. With the purchase of Royal, Eastern was able to expand the scope of its operations and its products.

These prosperous times and growth at Eastern, however, did not last. In 1968 the mill in Brewer closed. This put 580 mill workers and 800 woodlands employees out of work.

That same year, several former employees reopened the mill and put 300 employees back to work. The company was also given a new name, Eastern Fine Paper Company. 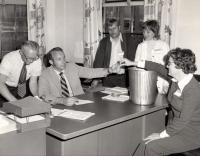 One of the former employees who helped reopen the mill, Bruce Hamilton, became a great hero amongst the mill workers. Hamilton had worked to save the mill and the jobs of hundreds of people.

In 1969 Canadian based E.B. Eddy purchased 51 percent of the Eastern mill and remained the owner until 1989.

In 1989 Joseph Torras, the owner of Preco Inc., bought the mill in Brewer and renamed the company Eastern Pulp and Paper. Eastern was made to purchase pulp from a mill in Lincoln, which Preco had bought from Eastern in 1968.

While Eastern still managed to keep its doors open for quite some time, in 2003 employees faced unexpected layoffs and in 2005, Eastern closed its doors permanently and put hundreds of employees out of work.

Throughout Eastern's history the company was known for its fine paper products. They not only received important wartime contracts but also printed paper goods such as Monopoly Money, paychecks for soldiers and writing paper.

During Eastern’s long run the company relied on important inventions and innovations to keep costs down and to find easier ways of making high-quality paper goods. In 1943, for example, Eastern developed a hydraulic rosser that made debarking wood much easier and in the same year pioneered a process of mixing oil and coal dust to decrease oil consumption.

Additionally, in 1947 the company put a new power plant into operation that met all of the South Brewer mill's power needs at a lower cost.

Ayer’s sawmill had expanded into a large-scale operation and provided jobs for many people through the end of the nineteenth and into the twentieth century. Eastern has greatly impacted the people of Maine; the mill was an important part of the lives of many people throughout history. The main focus of this exhibit is the employees of the Eastern Fine paper mill.

The Women of Eastern Fine Paper

The Benefits of Working For Eastern