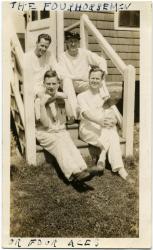 Sanatoriums for treatment of people with tuberculosis, often built on mountains or hilltops where the air was cool and the breezes frequent -- or those in the western states where dry, clean air was prevalent -- were the best available option in the 1920s when Merle Wadleigh, about 24, of Portland, contracted the disease.

Wadleigh became a patient at the Western Maine Sanatorium in Hebron, which was the state's first such facility, opening in 1904. Privately operated until 1915, the Sanatorium offered rest, fresh air, and a healthy and rich diet.

In 1915, the state took over both the Maine State Sanatorium in Hebron and the Chase Memorial Sanatorium in Fairfield, renaming them the Western and Central Maine sanatoriums. Patients who were the sickest went to Central Maine. Those for whom a cure was deemed probable were assigned to the Hebron hospital.

Wadleigh, who spent part of 1928 and 1929 at Hebron, recorded some of his experiences in photographs, which he saved in an album. They show a campus-like facility, friendly relations between staff and patients, relatively healthy looking patients, and a July 4 celebration.

Absent are images that reflect treatment, the fact that many patients probably were poor (wealthier ones went to private facilities), and a sense of the challenges of being confined and regimented for months or years.

Nevertheless, the photos provide non-institutional insight into some of one patient's views of his time at the "san."