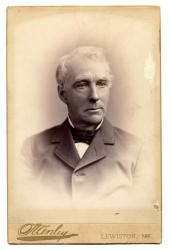 One day before he was appointed Surgeon General for Maine -- an important Civil War position -- Dr. Alonzo Garcelon of Lewiston wrote Maine Governor Israel Washburn, asking if the governor had appointed regimental surgeons.

Garcelon (1813-1906), a native of Lewiston and graduate of Bowdoin College and the Medical College of Ohio, was a physician in Lewiston. But Garcelon also was active in politics. He served in the Maine House of Representatives in 1953 and from 1857-1858 and in the Maine Senate between those two terms, from 1855-1856.

He also was a businessman. He and his brother-in-law William Waldron founded the Lewiston Journal in 1847. In addition, his efforts were the primary reason the Maine State Seminary (later, Bates College), was located in Lewiston in 1855. He served as an instructor and longtime trustee at the college.

When the Civil War began, Garcelon was well positioned for his new task as Maine's Surgeon General. He needed both medical and political experience to carry out his job.

In his letter to the governor, Garcelon wrote, "May our Rulers not falter for the people are with them in this great struggle of Liberty against Slavery."

As a small collection of Garcelon's correspondence suggests, the job of the Surgeon General was quite varied. He ensured that each regiment had a surgeon who was outfitted for the job before leaving Maine. As one letter shows, he also ensured that those surgeons were competent and well-qualified doctors.

He established a hospital in Portland to care for sick and injured soldiers, handling details such as the types of beds to be purchased. He pushed to implement a Maine law that allowed women to serve as nurses to soldiers, as federal regulations restricted nurses or other medical personnel to be enlisted personnel. He dealt with issues of disease in the army camps.

Garcelon visited Maine units near Washington, D.C. Among the soldiers he was especially concerned with were his eldest son, Charles, a lieutenant in the 16th Maine; and his brother-in-law and business partner, William Waldron, a captain in the same regiment.

After the war, Garcelon, who had been a Republican, switched to the Democratic Party. He became mayor of Lewiston in 1871 and again in 1883 and served one term (one year) as governor in 1879. A controversy over possible voter fraud in the 1879 led to an armed standoff in Augusta and the controversy remained associated with Garcelon.