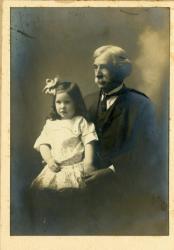 Charles Augusta Garcelon, the oldest son of a prominent Lewiston family, was 19 when he enlisted for Civil War service. He and his maternal uncle, William Waldron, 39, also of Lewiston, formed Co. I of the 16th Maine Infantry Regiment, into which Charles was mustered as a 2nd lieutenant. Waldron was mustered as captain.

Not many Charles Garcelon letters remain in the collection of family materials at Bates College. Those that do are newsy, but also philosophical and reflective. His mother had died in 1857, leaving four children at home. Although his father was still very much alive and had, in 1859 married again, Charles felt responsibility for the welfare of his siblings and showed considerable concern for the uncle who served with him.

Garcelon wrote frequently to his aunt, Jane Hitchcock Waldron, and sometimes to his father.

After the Battle of Gettysburg, he wrote to his aunt about her husband's injury -- Waldron was shot in the neck -- and tried to reassure her.

He referred to the war as "this wicked way" and mused about why some who risk their lives in war are spared and others who "remain in seeming security" away from the the war are "taken."

After the war, Garcelon worked for the Wabash Railroad. He became conductor for the Pullman Palace Car Co., then District Superintendent at St. Louis. He later went to Chicago as Pullman's chief operating officer.

When Garcelon retired in 1906, he and his wife, Esther Coffin, retired to Lovell, where they built a large home on Kezar Lake.