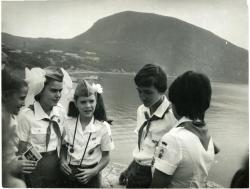 "I have been worrying about Russia and the United States getting into a nuclear war," Samantha Smith, 10, of Manchester wrote to Soviet leader Yuri Andropov in December 1982.

The threat of nuclear war was on her mind. Andropov had become General Secretary of the Communist Party a month earlier. The nearly 40-year-old Cold War, nuclear weapons, and international tensions were much in the news. President Ronald Reagan used strong anti-communist rhetoric. Smith was not the only person worried about nuclear war.

When Smith wrote to Andropov and, in April 1983, received an answer, she became an international celebrity. She had asked him if he planned to start a nuclear war and, if not, how he planned to prevent one. He assured her he and the Soviet people wanted peace.

Smith and her parents visited the Soviet Union as Andropov's guests in July 1983. The letter, the visit, and the subsequent publicity helped to humanize both the Americans and the Soviets. While Samantha was sometimes criticized for being naive and a pawn of Soviet propaganda, her experiences offered hope to many that peace might be possible and that two nations that had locked horns for decades could relate on calmer terms.