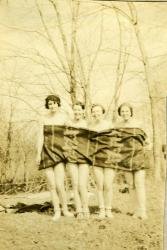 The adventures of seven F.S.N.S. girls, from the pages of their 1920s memory books.

The archive at the University of Maine at Farmington contains a collection of seven large memory books with Farmington Normal School embossed on the covers, along with the name of their owners. The books contain photographs of girls sporting bobbed hair and bloomers, and pages of notes about classes, teachers, chaperones, and rules - and often, about memorable events when rules were broken. Pasted to the pages are drawings, menus, dance cards, theater programs and more – all souvenirs of roaring good times at F.S.N.S. and further abroad, as travel by train and car took the girls on adventures all over New England.

What makes the scrapbooks truly special are the comments and photo captions written by the memory makers: the jokes, the gripes, the hopes and aspirations of seven "Normal" girls and their classmates. Through them, it is possible to get a genuine feel for what it was like to be a F.S.N.S. co-ed in the 1920s.

The title of this exhibit was taken from Dolly Dunphy’s memory book. A page covered top to bottom in photographs of Dolly and her friends at play is exuberantly captioned "More Darn Fun!" It captures not only Dolly’s zest for life, but the overall theme of the memory books and the remarkable young women who created them.

Dolly Dunphy lived on the third floor of Purington Hall, christened Angel Alley by the "third floor gang" who resided there. The Angels were known for being loud, fun, and daring, and for their frequent run-ins with the college’s strict demerit system for breaking rules. A classmate, Sarah Blaisdell, wrote "When I was assistant Matron, the girls on the third floor were devils!!! And then some." Angels or devils, the third floor gang was determined to enjoy dorm life to the fullest.

Dolly was smart, funny, vivacious, and an outstanding multi-sport athlete. Her charismatic personality made her hugely popular with both male and female classmates: comments by friends refer to her as "The Merry-Maker of Angel Alley."

She threw herself into college life with boundless energy – and it sometimes got her in trouble. The house Matron caught Dolly and several other "Angels" having one of their frequent "midnight spreads" in a dorm room closet, and as a result of breaking curfew, the girls lost all special permissions (opportunities to leave campus) for an indefinite amount of time.

Dolly, from her cheeky comments on the punishment, seemed unrepentant. She suffered much more from the consequences of another escapade later that year: a skinny-dipping party left her with a terrible case of poison ivy, and itching from head to toe!

Jerry Lawrence was another student fully engaged in Normal School events. She was enrolled in the Household Arts Course, and lived in the Home Ec Cottage during her senior year. It is clear from her memory book pictures that Jerry took full advantage of the opportunities for outdoor activities at F.S.N.S.: swimming, snowshoeing, tennis, hiking, and picnics, to name a few.

Jerry was a member of the Pierpole Campfire Girls, a cabinet officer of the Christian Association, sang in the Glee Club, and was involved in Student Council. Because she continued to maintain her memory book after graduation, we know that she used her Household Arts degree to become a teacher at the Amoskeag School of Domestic Science in Manchester, New Hampshire.

An aspiring singer, Phyllis was active in theater and a fierce bridge player. As a member of the Music Committee, Phyllis organized dances and booked bands for the school Hops. She, like Dolly, had her fair share of scrapes with the school rules, and was brought before Student Council for sneaking out of her dorm to go joy riding with friends. She was scolded but not punished for the offense. The driver (who did not have a driver’s license) did not get off so lightly!

Katherine appears to have transferred to Mt. Ida after her first year at F.S.N.S., but mentions several parties, dances, and class trips that she enjoyed during her time in Farmington.

Rachel Gates was a cast member in the F.S.N.S production of "Princess Bonnie," as well as an aspiring writer. She submitted several short stories to a magazine, under the name of Mr. Ray Gates. Unfortunately, the stories were not accepted, and Rachel’s note reads "Literary Efforts! Fruitless!"

From other items in her memory book, we know that Rachel taught in the Model School as a student teacher, where she was showered with notes and drawings from her smitten young pupils.

Ukelele playing Helen Varner was active in the Dramatics club, and played a role in the 1928 F.S.N.S musical production, "Spanish Moon." She was a big fan of Normal School basketball and football: her memory book contains pages of clipped articles and score tallies, as well as season ticket stubs.

Kitty Haskell had many talents: she played the piano in Normal School and Model School concerts, sang and danced in Normal School musical productions, and –according to friends – gave good advice and told excellent fortunes. Like most of her Normal School classmates, Kitty planned to become a school teacher after graduation.