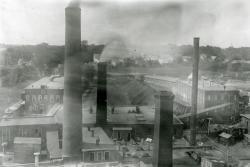 Yarmouth and its soda pulp mill were known around the world for the high quality pulp – and hence high quality paper – they produced in the late 19th and early 20th centuries.

Papermaking got its start in February 1865 with a mill located on the third falls of the Royal River. The mill was known as Yarmouth Paper Company. Five years later the mill, owned by Dennison and Brown, burned to the ground.

At the time, real estate on the Royal River was precious because of the power the falls generated. In 1872, three men who wanted to take advantage of this, H.M. Clark, Homer F. Locke, and Henry Furbush, erected the first soda pulp mill of its kind in New England. The mill was still known as Yarmouth Paper Company.

Soda pulp was a new technology in the late 19th century for producing a better quality paper product. It was a grueling process that started with cords of poplar wood that were cut into chips, bleached, and then put into huge digesters that broke them down into a pulp consistency.

The pulp was then either shipped in its natural state or pressed into huge rolls for books or magazine paper. In 1874, S.D. Warren and George W. Hammond bought the Yarmouth Paper Co. and renamed it Forest Paper Company. It became known worldwide for producing the best quality soda pulp fibre. 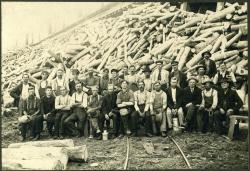 Because of its great success, Forest Paper Co. was able to expand its production over the course of its existence and what started as a humble wooden mill building transformed into an industrial complex, sprawling over 10 acres with 10 brick buildings and numerous smoke stacks and chimneys. Most of the improvements were due to the persistence of George W. Hammond, who committed himself to keeping up with the rapidly changing industrial times.

Spur tracks were laid to transport wood and other materials, trestles were built on the surrounding real estate, water management systems were introduced. For a time, Forest Paper was the single largest soda pulp mill in the nation.

Maine’s industrial production of soda pulp was led by Forest Paper Co. that, between 1874 and 1923, employed hundreds of Yarmouth residents and made the company famous for their world-class product. The mill closed in 1923 due to embargos lifted on soda pulp, making Swedish pulp less expensive.

Matthew Anderson of Portland is a 2012 graduate of University of Southern Maine, where he earned a bachelor's degree in history.