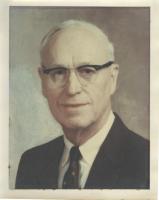 Even though Carlton P. Fogg (1899-1972) never directly worked for or with the Kennebec Valley Vocational Technical Institute, he played a crucial role in its founding. He was one of the earliest and strongest advocates of vocational-technical education in the Greater Waterville area. Part of his passion for vocational and technical education undoubtedly came from his personal experience.

Carlton was never able to obtain any formal higher education for himself. With the untimely death of his father, he found it necessary to go from high school directly to work in order to support his mother. It was during this time that he gained hands-on vocational technical expertise.

Between 1917 and 1953, Carl worked for the Lombard Traction Engine Company, Keyes Fibre Company, and Hollingsworth & Whitney Co. (now Scott Paper). Carlton also served, for a time, as president of the Local 1828 International Association of Machinists. 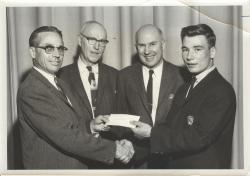 Shortly after his mother died in August of 1953 Carlton took a leave of absence from Hollingsworth & Whitney in order to share his passion for technical education by becoming a teacher. He quickly went from being a shop teacher to heading the Industrial Education Department at Waterville High School.

As Carl gained more experience and a great deal of respect he also became more vocal about the need for a greater level of vocational and technical education throughout the state of Maine but especially in the greater Waterville area. By the early 1960s he got into the habit of writing opinion pieces, delivering speeches, and lobbying in person for vocational education.

In 1966 Carlton was named director of the recently established Waterville Regional Vocational Center based at Waterville High School. His already full schedule became even busier as he continued lobbying, teaching, and serving as the center’s administrator. 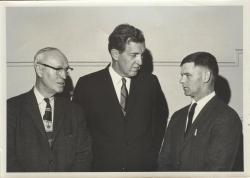 He also took up the post of coordinator of the Central Maine Vocational Technical Advisory Committee. It was in this role that he started focusing specifically on establishing a post secondary technical training institute in the Waterville area. Carlton found allies in this endeavor among a variety of community leaders.

Kennebec Valley Vocational Technical Institute owes a great deal to the hard work and cooperation of Carlton P. Fogg with Aaron Levine, Edmund Muskie and a host of other dedicated advocates.

Carlton lived long enough to see the Kennebec Valley Vocational Technical Institute founded in 1969. Unfortunately, he did not have much of a chance to see its enormous growth and development, as he passed away June 29, 1972.