Black Hawk Putnam of Houlton, who was named for the famed Sauk Indian, was 23 when he enlisted as captain of Co. E of the Maine 1st Cavalry Regiment on October 19, 1861. Putnam's father was John Varnum Putnam.

The 1st Maine Cavalry and the 1st Vermont Cavalry were engaged in a reconnaissance on May 24, 1862 when they met heavy artillery, infantry and cavalry forces of the Confederate army. Most units fell back to Middletown, Virginia, but some of the 1st Vermont and a portion of the 1st Maine charged and a large number of troops were killed or captured. 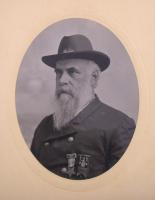 Putnam led a charge at Middletown. His horse was shot, he was wounded and, with other soldiers, separated from the remainder of the regiment. They were in the woods and mountains for nine days, but escaped from pursuing Confederates.

Apparently because he did not complete his three-year enlistment, Putnam was drafted as a result of the March 1863 "enrolling and calling out of the national forces." The Board of Enrollment that covered Houlton approved his furnishing a substitute and Putnam paid Alexander Gervin of Houlton to serve as his substitute. Gervin was mustered into the 3rd Maine Infantry on Sept. 25, 1864.