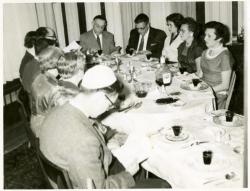 Most Jews who came to the United States from Europe settled in large cities such as New York and Boston, where they found a vibrant religious community waiting for them.

Maine, in contrast, did not offer Jewish newcomers the advantage of a large and active Jewish population. So, finding their place in a new setting and culture came with its challenges.

During the process of settling down in Maine, Jews needed to adjust their ways of life to fit in with the social norms of small-town New England. Although Jews came to Maine and found an environment in which it was difficult to preserve their identity, they managed to do so.

Jewish identity remained cohesive through the maintenance of organizations that emphasized the importance of community, such as synagogues and summer camps. Religious education, the observance of traditions within the home, and the performance of essential rituals also played integral roles in fostering the sustainability of Jewish culture.

Robyn Wardell, a member of the Colby College Class of 2011, is from Ridgewood, New Jersey.

Return to The Jews of Maine