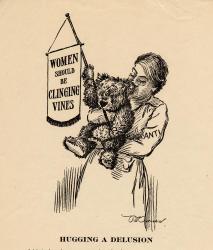 Images from the Maine Historical Society

From the time of the Seneca Falls Women's Rights Convention in 1848, gaining the right to vote for women became a goal for a number of groups.

Because the Constitution reserves for states decisions about voting, groups who favored and opposed woman suffrage worked at the state level to try to gain the franchise for women. Still, supporters realized a national amendment was crucial to the effort and lobbied on that front as well.

In Maine, groups for and against women voting sprang up in many cities and towns. National speakers such as Susan B. Anthony and Lucy Stone arrived to boost the pro-suffrage cause.

Still, the effort continued through the second half of the nineteenth century into the first two decades of the twentieth with lively debates and arguments that focused on women's roles in society as well as women's rights.