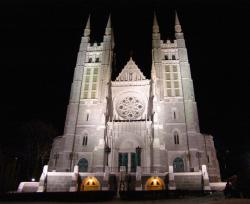 As a result, Lewiston's population nearly doubled within a decade. These immigrants sought a spiritual leader of their own and in 1871 a French Catholic parish, St. Peter's, was established.

Within a decade, the Dominican order from France began staffing the parish, now called St. Peter and St. Paul.

As the congregation continued to grow, the original church was deemed inadequate and plans began by the turn of the century for a grand French style cathedral church.

The resulting church, named a minor basilica in 2004, became the largest parish in the state, larger than some entire dioceses in other parts of the country.

The famous facade of St. Peter and Paul Basilica has been used as the cover of city reports, for promotion of cultural events, for economic development efforts, and as a backdrop for political campaigns.

Its history provides insight into the Franco-American community of Lewiston, but also into the struggles among ethnic groups for accommodation within the Roman Catholic Church in Maine.