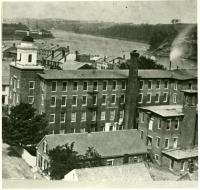 Two hundred workers were required during peak production in the Cotton Mill in Hallowell, Maine. The mill employed young children and had to meet Hallowell School Board standards at its mill-run school. A child that works in a factory might work eight to twelve hours for a day, six days a week, to earn one dollar. A lot of children worked at the age of seven, they worked in mills or moving heavy loads. The children didn't get time to play or rest; and they would get sick from the damp, dark and dirty environment they worked in.

Two million school-age children each worked fifty to seventy hours a week. Some of the children’s parents could not take care of them, so they were put in a place were they were forced to work while being contained by barbed wires.

Churches, labor groups, teachers, and many other people were very upset about what was happening to their children. They tried to do something about it. From 1802 to 1878 laws shortened working hours, improved working conditions, and increased the age of the children that were allowed to work. It took many years for the U.S to stop child labor. In 1813 Connecticut said that children must have schooling in order to work. By 1899 twenty-eight states had enforced rules about child labor. Many attempts were made to pass more child labor laws. In 1918 and again in 1922 the Congress passed child labor laws, but the Supreme Court denied both. In 1924 Congress presented an amendment to the constitution to stop child labor, but some states did not agree. In 1938 the Fair Labor Standards Act made the minimum age to do certain work fourteen years old. When the child is sixteen years old its an option to work during school hours and at eighteen you could do more dangerous work (such as working in mills) if you chose to.