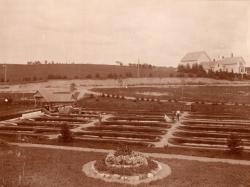 The human hand has long been involved in fish culture. For several thousand years, beginning with the Chinese, humans have harvested fish eggs and milt and tended them until the fish hatched and their yoke sacks absorbed so the fish could be released, or fed the newly hatched fish until they were larger and more likely to survive before releasing them.

Why? To improve fishing, the food supply, and the health of rivers and lakes. Dams, industrial runoff and other causes led to lowered fish populations.

Fish hatchery techniques and knowledge has improved over the centuries, from the mid 18th century innovation of a method of impregnating trout eggs artificially to the late 19th century dry method of taking eggs, which allowed additional time for fertilizing the eggs. 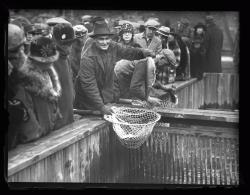 Charles G. Atkins, along with Nathan W. Foster, became Maine's Commissioners of Fisheries in 1867. They researched fish propagation and began collecting eggs from landlocked salmon and working to fertilize and hatch them. David Pottle of Alna fed and reared most of the eggs the commissioners collected.

Atkins successfully used the dry method of egg gathering, fertilizing close to 100 percent of the eggs he gathered.

The state's first fish hatchery was at Craig Brook in East Orland, started in 1871, and rebuilt in 1880. It became a National Fish Hatchery in 1889, dedicated to raising and stocking juvenile Atlantic salmon in Maine.

The state was particularly interested in Atlantic salmon and operated other facilities around the state. In 1895 a new law allowed the Maine Commissioners of Fish and Game to purchase or lease land for fish hatcheries. They purchased the Caribou and Auburn hatcheries, concentrating until about 1900 on raising landlocked and Atlantic salmon, then adding several types of trout.

In the 19th century, most fish were stocked as fry into hundreds of Maine lakes. For the most part, hatcheries did not feed the fry for very long. The fish develop from the egg's yolk and, at the fry stage, absorb the yolk, which is when they often were released. 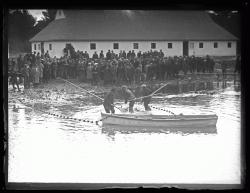 By 1900, hatcheries were feeding the fry before releasing them, hoping to increase the survival rate. They often used ground beef livers and spleen, sheep organs, grasshoppers, and various types of fish as feed. Beef liver continued as the main source of hatchery food until the 1950s when it was replaced by dry pellet food.

The Caribou Fish and Game Association got into the hatchery business in 1892 and operated a fish hatchery over B. L. Brigg's woodshed, then in the basement of the S. L. White Drug Store. It was one of about 30 private hatcheries begun in the state in the mid to late 19th century, most interested in stocking ponds and lakes for sport fishing.

When the state took over the hatchery, it built a feeding station on Farnham Brook. In 1904, the hatchery moved to Otter Brook, apparently for a better water supply.

A 1900 directory of Caribou reported, "The salmon pool on the Aroostook River, near the village is becoming more famous each year and affords any amount of rare sport during the open season." Its success was due to the local fish hatchery that stocked the pool. 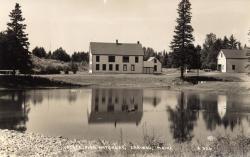 Between 1895 and 1956, the state operated about 50 hatcheries or feeding stations. Besides the hatchery at Craig Brook, the federal government opened hatcheries at Bucksport in 1872, Sebec Lake in 1873, Grand Lake Stream in 1875, Green Lake in Dedham in 1892, Upper Penobscot in 1903 and the Salem Feeding Station in 1941.

Scientific advances improved the feeding and planting of fish over the years and the state modernized its hatcheries and reduced their numbers, selling the Caribou hatchery by the mid 1950s.