North Waterford holds its "World's Fair" every July, with the notation, "This annual event may be the world's smallest world's fair."

Skowhegan and Bangor both hold "state" fairs, probably holdover titles from the days when a state fair rotated among communities. Skowhegan calls its annual August event, which began in 1818, "the nation's oldest continuously run agricultural fair." Bangor's fair, held at the beginning of August, is "the largest state fair held in Maine."

Fryeburg's Fair, which began in 1851 and is held in October, is "Maine's Blue Ribbon Classic" and the state's "largest agricultural event."

Agricultural fairs began in Maine in the early 19th century, held to promote new techniques, better farming methods and thus better crops and livestock. Most early fairs featured shows of cattle and crops, with premiums paid for the best of each. Fairs stressed education and a speaker usually delivered a lecture.

County agricultural societies sponsored most of the fairs. The Maine State Agricultural Society, a revival of an earlier such group, was incorporated in 1855 and sponsored a state fair that rotated to different communities, until settling in Lewiston in 1881. 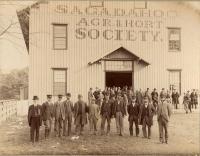 "Gradually," historian Clarence A. Day wrote, "the public proved that it preferred to be amused rather than educated. Long before 1900 the fairs had lost much of their educational value."

Maine still boasts more than 25 agricultural fairs that offer adult and youth agricultural events and exhibit halls, along with the midways, food, and entertainment.