When John Dunlap, official printer to the Continental Congress in Philadelphia, set the type form in his press on the night of July 4, 1776, he apparently was in a hurry to get out the first printed copies of "A Declaration by the Representatives of the United States of America, in General Congress Assembled."

Between July 2 and July 4, representatives of the Continental Congress had debated the language of the draft written largely by Thomas Jefferson. When they approved the document that came to be known as the Declaration of Independence, they voted that copies "be sent to the several assemblies, conventions and committees, or councils of safety, and to the several commanding officers of the continental troops; that it be proclaimed in each of the United States, and at the head of the army." 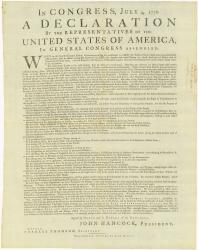 Dunlap got the order, the type was set, a proof drawn, corrections made. Then the revised type was set in the press, slightly askew. That is one clue to the authenticity of Dunlap Declaration broadsides.

In 1976, Frederick Goff published the findings of a Library of Congress examination of 17 of the 21 known surviving copies of that first printing of the Declaration. The study measured margins and dimensions, looked at chain lines (printing marks), watermarks, type of paper, folds, endorsements, broken letters and other clues about the documents. Those findings have been useful in determining the status of other documents that appear to be Dunlap imprints from July 4, 1776.

Maine Historical Society's copy of the Dunlap broadside, in the society's collections since 1906, was authenticated in 1991.

John Samuel Hill Fogg (1826-1896) donated the broadside as part of his autograph collection of more than 5,000 items to the Maine Historical Society. The society took ownership in 1896, but did not take possession until after Fogg's wife, Mary, died.

Fogg had been a student at Bowdoin College when he became interested in autographs -- letters or documents that contain signatures of people important to events in American history. He probably collected the Dunlap broadside as part of his collection of documents from all signers of the Declaration of Independence.

The Fogg Collection arrived at MHS while the organization was building its headquarters next to the Longfellow House in Portland. The 50 boxes of materials were stored and, while the Declaration was listed in a 1915 inventory, it was not identified as an original.

MHS sent some signatures in the collection to the Library of Congress for verification and displayed relevant documents for the centennials of the Declaration and Constitution, the Dunlap broadside remained unidentified. One MHS librarian suspected it was an original, but the authenticity was never documented.

In 1991, after an inquiry about the document, MHS began the work of authenticating it. A respected Boston book dealer confirmed it was genuine and Harvard University compared it to their copy, further confirming the finding.

The information in the Goff work helps provide evidence.

The MHS copy is slightly crooked, has one of the published descriptions of watermarks, and has the same damaged letters as other early copies that Dunlap printed. Later copies have other damages, a result of wear to the type as the printing proceeded.

For instance, on line 9 from the top, the "h" in "the" is damaged. On line 14, the "f" in "safety" is damaged. There are seven clearly damaged letters in the MHS copy.

In addition, at the bottom, the "P" of "Philadelphia" is located directly beneath the comma following Charles Thompson's name. That is indicative that the MHS copy was among the earlier ones printed that night. On later copies, the "P" is beneath the "n" in Thompson's name.

Goff and the Library of Congress were able to determine that some of the copies examined were authentic -- providing a basis for evaluating other copies -- because the provenance or origin of those documents is known.