Maine Memory Network
> History in Motion: The Era of the Electric Railways

History in Motion: The Era of the Electric Railways

Maine communities have enjoyed the benefits of public transportation for as long as the state has existed. Early ferries of the colonial era were followed in the mid 1800s by horse-drawn omnibuses and horse-drawn streetcars.

In the early 1800s, horse-drawn transportation borrowed steel-rail technology from railroads. Horsecar operation began in 1863 in Portland with the opening of the Portland Railroad Company.

Electric streetcars, interurbans and other rail transportation began to replace horsecars by the end of the 19th century. In 1889, only seven years after construction of the first central power station in New York City, Bangor Street Railways operated Maine's first electric streetcars. 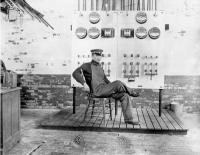 Man at the Goodall Mill Controls

Electric railways had a longer range than horsecars and connected people in various communities in Maine and connected Maine to southern New Hampshire, Massachusetts, and beyond.

By the early 20th century, the fascination with private automobiles, the development of gasoline-powered buses, and changes in vacation and travel habits led to the demise of the street railways.

Street railway owners had to build trestles and lay track, as well as clear snow in the winter, to provide freight and passenger transportation services.

Electric Railways and the Goodall Mills

Industrialists like Thomas Goodall of Sanford built and operated electric railways to move raw materials, finished products -- and to provide transportation for the workers in their mills.

Tourism and Changes in Transportation

Street railway owners built amusement parks and casinos and promoted leisure use of the trolleys to help supplement the industrial uses of the lines. Changes over time drew trolley riders to private automobiles and other forms of transportation.