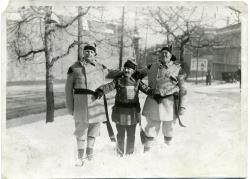 In the early 1600s, French explorers and colonizers in the New World quickly adopted a Native American mode of transportation to get around during the harsh winter months: the snowshoe.

Most Northern societies had some form of snowshoe, but the Native Americans turned it into a highly functional item. French settlers named snowshoes "raquettes" because they resembled the tennis racket then in use.

In 1840, a group in Montréal, concerned that snowshoeing was going out of fashion, began the Montréal Snowshoe Club. By 1843, the group was sponsoring races and snowshoe clubs were sprouting up around the Province of Québec.

The Union Canadienne des Raquetteurs began on March 8, 1907, and held its first convention in 1908, with 25 clubs represented. Some were French Canadian, others Irish and English Canadian. Clubs were soon formed in other provinces in Canada.

In 1924, the first U.S. club formed in Lewiston, which hosted the first international convention in 1925.

Lewiston boasted more than 15 clubs, all French-Canadian, and Biddeford at least two, also French-Canadian. The clubs served as homes to athletic events, as social space, and as purveyors of Franco culture. Also crucially important were the maintenance of ties across the border for the immigrants and those who they had left behind.

In addition, the clubs served an important function of giving the Franco communities political voices and influence in the state.