Like the Boston Massacre, the burning of Falmouth rallied Americans to proclaim independence.

These conflicting social visions – hierarchy versus democracy – exacerbated tensions over land titles, poll taxes, and a deflationary currency policy that favored money-lenders and proprietors over the indebted and land-hungry settlers on the frontier.

After the long struggle with France and its Indian allies ended in 1763, British national debt stood at an all-time high, and its empire now included Canada, parts of the Caribbean, Florida, and a vast territory west of the Appalachians. Faced with these burdens, Britain launched a broad program of imperial reorganization, expecting the American colonies to contribute to the cost of maintaining their own defense. 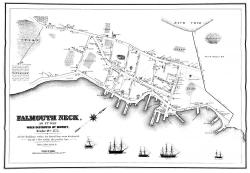 Between 1765 and 1773 – a time of financial hardship in the colonies – Parliament imposed a series of trade regulations and taxes, and after protesting these new policies, Whig leaders in America adopted a course of action that led to the Declaration of Independence in 1776.

While Maine shared in these protests, its situation was somewhat unique.

First, Maine had an additional grievance stemming from the British trade in ships' masts. White pine from Maine was critical to the British navy, and during a long period of warfare with Spain, France, and the Netherlands beginning in the late 1600s, the British Admiralty progressively tightened regulations on cutting pine for lumber.

To stabilize the supply of masts, the Admiralty gave control over this lucrative trade to politically connected colonial merchants, and this, too, became a source of resentment.

Maine's second special feature was its long exposed coast, which presented almost impossible problems for defense, given Britain's superiority on the seas.

Finally, Maine's status as a "colony of a colony," subject to both Britain and Massachusetts, shaped its experience in the Revolution. Profiting from this dependent relation, Massachusetts merchants carved out frontier empires by renting land, building mills, and providing credit and provisions for the struggling settlers.

The timber, fish, and produce settlers sent to Boston in exchange were inadequate to discharge these expenses, and thus the proprietor-merchants controlled the economy of eastern Maine. By the 1770s, merchant houses in Falmouth, Wells, York, Scarborough, and Kittery maintained smaller fiefdoms in their own back country, and this system of unequal exchange polarized Maine society along geographical lines.

Frustrations with British imperial agents melded with frustrations aimed at these Boston and local merchants.

As grievances with the imperial administration mounted between 1763 and 1775, colonials expressed their opinions through crowd actions, often encouraged by town elites. Over the decade, a delicate relation developed between mob participants and Whig leaders, who well understood the volatile nature of these protests.

During the Stamp Act crisis of 1765-1766, a band of 30 men with blackened faces attacked the Scarborough home of Richard King, a wealthy merchant, shipbuilder, mill owner, land speculator, and moneylender. The mob gutted his elegant two-story home and destroyed his financial records. Patriot John Adams called the Scarborough rioters "rude and insolent Rabbles," even while he incited similar riots against imperial agents in Boston.

Boston's revolutionary Committee of Correspondence had gone so far as proposing a "Solemn League and Covenant" that pledged subscribers to boycott all British goods, in response to Britain closing Boston Harbor in retaliation for the Boston Tea Party of December 16, 1773.

Falmouth (Portland) greeted these nonimportation agreements with mixed enthusiasm; as middlemen in the lucrative British trade, its merchants had much to lose by the boycott, and they understood that their wharves, warehouses, and ships would take the brunt of any discipline by the British navy. Moreover, they were increasingly uneasy about mob actions.

Led by Samuel Thompson of Brunswick, local militia from towns further inland responded to the boycott by harassing both British agents and hesitant local merchants. Issues of debt, rent, and unequal exchange mingled with protests against the intolerable acts as the inland settlers warned the "effete, luxury-loving port towns" that they would violate the nonimportation agreements at their own peril.

Maine's coastal position, proximity to Boston and to Canada, and valuable natural resources combined to bring Revolutionary conflict to Maine soon after the opening salvos of war in Massachusetts in April 1775.

A Naval Disaster: The Penobscot Expedition

A fleet of privateers and hastily recruited soldiers failed to stop the British from occupying Majabigwaduce on Penobscot Bay in 1779. The disastrous Penobscot Expedition left the area, later known as Castine, to the British and a loyalist colony called New Ireland.

Soldier William Bayley's letters to his mother in Falmouth reveal some of the hardships endured by those left at home as well as one soldier's growing independence of his family and home.

To Separate or Not to Separate

Maine's separation from Massachusetts was a long process that involved debates over economics, taxes, and political representation, among other issues.

After the American Revolution, settlers on Maine's frontier -- away from the coast -- brought with them religions that were quite different in belief and practice from the traditional New England Congregationalists.