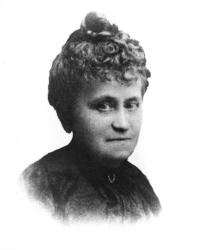 The strain and challenges of caring for wounded soldiers come through clearly in a letter Sarah Sampson, an agent of the Maine Soldiers' Relief Association, wrote to Maine Governor Abner Coburn in August 1863.

"I left our soldiers very reluctantly at Gettysburg; they needed my service much, and urged me to remain, but I had no instructions to remain." Sampson had been at Gettysburg for four weeks.

In an equally formal, businesslike manner, Sampson wrote, "The list of patients names, I had sent from there to Mr. Butterfield the names of those who have died there in any of the Corps or general hospitals."

In 1855, Sarah Smith, a native of Bath, had married Charles A.L. Sampson, who carved ship figureheads in Bath. When the Civil War began, Sampson joined the 3rd Maine Regiment as a captain of Company D.

Sarah Smith Sampson decided to join her husband and the 3rd Maine Regiment -- and devote her attentions to caring for sick and wounded soldiers.

There was no professional training at this time. She had to rely on her past experience in caring for ill and injured family members and neighbors in order to look after the soldiers.

Although the nurses were rarely present during battles, they were almost always on the scene within days, and often for weeks and months after the battle, caring for the injured and dying Maine men who were still in makeshift field hospitals located around the area. 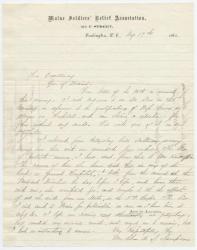 Sarah Sampson wrote in a post war report to Maine's Adjutant General, "We invariably found the soldiers grateful for what we brought them, but more so that we had come ourselves. Some told us they had not seen a woman for three months."

In 1862, Charles Sampson, by then a lieutenant colonel, became ill and returned to Bath, accompanied by his wife. However, she soon returned to Washington and the Relief Association.

In March 1864, she went to Fredericksburg to deal with sick and wounded from the Battle of the Wilderness. In her later report, Sampson wrote that many of the wounded Maine soldiers were lying in shops in the town.

She wrote, "We went down, and by the light of one solitary candle in each store, beheld such wretchedness and suffering as we have never seen before."

When the 3rd Maine completed its three years and returned to Maine, Sampson decided to remain and continue her service to soldiers. She served in Washington, helped wounded soldiers get back to Maine, was aboard a hospital ship and suffered a serious fever.

She chose to stay in Virginia at the war's end to assist with arrangements for soldiers to return to the North. In October 1865, after four-and-a-half years at or near the front, she returned to Bath.

Her concern about those who had suffered because of the war continued. She and other women began the Bath Military and Naval Orphan Asylum in 1866 and she served as its first director.

After her husband died in 1881, Sampson moved to Washington, worked for the Pension Bureau to support herself, and lived with a sister.

She died in 1907 and was buried at Arlington National Cemetery.