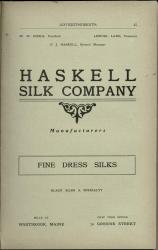 The Haskell Silk Company's 58-year history spans the rise and fall of industrial silk manufacture in America. It was one of the largest and longest-lived silk companies. Founder James Haskell's son, Edwin, helped set the mill up and died the year it closed.

By the early 20th century the American silk industry was the largest in the world. Manufacturers relied on imported Japanese silk filament (raw silk).

At the industry's small-scale beginnings (1830s) the intent was to use American raw silk. For this reason in the 1830s, people everywhere set about raising silkworms and reeling cocoons to supply filament (raw silk) for manufacturers. The first manufactured product was hand-sewing thread. 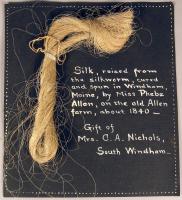 Into the 1860s production consisted of trimmings, ribbon, hand and sewing machine thread.

The industry clustered in the mid-Atlantic area, close to raw silk importers. Nevertheless, in 1874 James Haskell founded the Haskell Silk Company in Westbrook, the first and only industrial silk manufacturer in Maine. Between 1874 and 1881 Haskell marketed four brands of sewing machine thread: Presumpscot, The Haskell Silk Company, Dirigo and Anglo.

In 1902 Haskell constructed a state-of-the-art mill at a new upriver location. The company prospered into the 1920s, when many factors undermined the entire American silk industry. In 1930 Haskell closed down. An attempt to re-open with help from the Reconstruction Finance Agency failed.

Jacqueline Field, a graduate of Edinburgh College of Art and Moray House College, Scotland, is the author of "From Agriculture to Industry: Silk Production and Manufacture in Maine 1800-1930" (Maine History, Vol. 44, October 2008) and lead author of the award winning co-authored book American Silk: Entrepreneurs and Artifacts (Texas Tech University Press, 2007). She has published other articles on American silk in Dress, the Journal of the Costume Society of America.