Maine Memory Network
> Father Rasles, the Indians and the English

The French, it is said, had three primary motives for coming to North America: fish, furs, and faith.

Many priests, mostly Jesuits, came with the fur traders and fishermen. They lived among the Indians, learned their language, converted them to Catholicism, and counted them as allies in battles with the English.

The English and French fought especially for territory along the undetermined border between Maine (part of Massachusetts) and French Canada. The French gained Indian allies when they protested English encroachment on Indian lands.

Father Sebastien Rasles (1652-1724) started a Jesuit mission and built a church in Norridgewock, on the Kennebec River. He was suspected of urging Indian and French troops to attack Wells in 1703. His name also is spelled Rale or Rasle, depending on the source and translation. 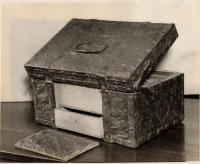 Indians continued to raid the increasingly fortified and more heavily populated settlements in Southern Maine, despite the 1713 Treaty of Portsmouth.

In 1721, Rasles, along with Indians flying the French flag demanded that the English leave Indian lands and return Indian hostages. The English stopped selling gunpowder and ammunition to the Indians and made plans to stop the French priest and the threat he represented to their control of Maine.

In 1722, Col. Thomas Westbrook raided the mission, hoping to capture Rasles. The Priest escaped, but the soldiers confiscated his strongbox and got important letters and documents that suggested he was working under orders of Canadian authorities.

To revenge the raid on Norridgewock, Indians burned Brunswick. 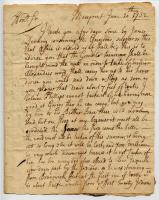 Letter regarding the murder of Sebastien Rasles, 1732

In a letter to his nephew in October 1722, Rasles wrote that when the Indians raided the villages, they took care to not harm the settlers, but to destroy only their property.

"This moderation of the savages did not have the effect which they had hoped," he wrote. "Thus we have a new signal of the war which is likely to flame forth between the English and the savages. The latter look for no support from the French … but they have a resource in all the other savage nations, who will not fail to enter into their quarrel and take up their defense."

With hostilities increased, the British were determined to stop Rasles and the Indians.

In August 1724, a combined force of English militia and Massachusetts and Mohawk Indians destroyed the village at Norridgewock, killing as many as 100 Indians and Father Rasles.

The Indians who were not killed fled to Canada.

Rasles lived among the Norridgewock Indians for 35 years. He ministered to their needs, conducted church services, advocated on their behalf, wrote an Abenaki-French dictionary – and was much loved by his followers.