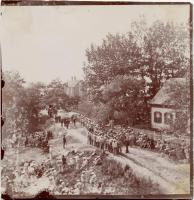 For those taken prisoner by the enemy, the war experience takes on a different dimension and, often, new types of anxieties and threats.

From the American Revolution through more contemporary wars, Mainers have both been prisoners of war, their experiences captured in letters home and diaries; and been host to prisoners from other countries.

All of the American prisoners, whether held in Maine, the Confederate States, England, or Germany, express several common needs: to reassure family members and to ask for packages or particular items to be sent to them.

Some prisoners were held for the duration of the war, some released in exchanges with prisoners from the other side, and some, like Peleg Wadsworth, escaped.

Abner Small, held in Confederate prisons during the Civil War, wrote, "Feel mighty hungry -- hungry all the time." Later, he wrote, "I never suffered so with hunger before & yet there Men who lie near me with plenty of Money & an abundance to eat."

Some prisoners expressed what many may have felt: being with their comrades on the front lines -- or at least out of captivity -- would have been far superior to the humiliation, degradation, and deprivation of being prisoners of war.