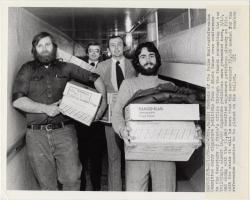 Maine made history on September 23, 1980, by voting on a citizen-initiated referendum to prohibit "the generation of electric power by nuclear fission thermal power plants in the State of Maine" – the first vote in the U.S. on whether to close an existing nuclear power plant.

The referendum was a result of concern about the safety of nuclear power plants, heightened by the Three Mile Island accident in 1979. Maine Yankee and other similarly constructed plants were closed for a time following the accident, while the Nuclear Regulatory Commission investigated.

Raymond and Patricia Shadis of Edgecomb, who grew and raised most of their own food, decided to have the milk from their cows tested. They found a high concentration of radioactive nucleoids in it and took up the anti-nuclear power cause, joined by many others in Maine.

The Maine Nuclear Referendum Committee's cause drew 40 percent of the vote, not enough to close Maine Yankee, but enough to raise awareness. They kept the pressure on, asking for information on safety and pushing officials carefully monitor the plant. 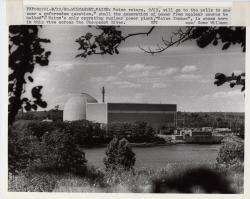 In addition, the vote that drew national attention changed the citizen-initiated referendum in Maine from a little-used option to one that began to be used frequently and one that brought large, nationally significant issues before Maine voters.

One argument against closing Maine Yankee in 1980 was that it would leave the state short of electricity and no time to find alternatives. Another referendum in 1982 proposed to close the plant over a five-year period. It too was rejected by voters as was a third referendum on the issue in 1987.

In between, in 1985, the Maine Nuclear Referendum Committee sponsored a ballot measure to require that any proposal to dump low-level radioactive waste in the state of Maine be put to a statewide vote. That referendum passed.

Maine Yankee Atomic Power Company was incorporated in 1966 and received a license to operate until 2008. The single-unit 900 megawatt Pressurized Water Reactor took four years to build.

It went online in 1972 and between then and its closing in 1996, it generated about 119 billion kilowatt-hours of electricity, and was reportedly the state's largest generator of electricity. 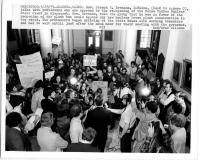 Maine Yankee ceased operations on December 18, 1996. It had been closed since the end of 1995 for repairs. Cracks had been discovered in steam generator tubes. The cracks apparently had had been present since 1990 but had gone undetected.

An inspection by the Nuclear Regulatory Commission prompted the need for repairs. The nuclear watchdog activists had sought the inspection.

The company maintained that the plant was still safe, but decided to close it because it was no longer economically viable to operate. It was dismantled, with that work completed in June 2005.

Because no long-term spent fuel storage site exists in the U.S., the 900 tons of spent fuel rods will be stored at the Maine Yankee site until at least 2023.