Away at School: Letters Home 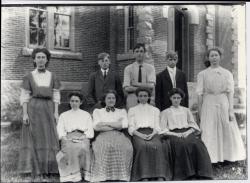 Like many 19th century students who went to academies or to other types of schools away from home, the first order of business upon arriving, after settling into ones rooms, was to write home – often to a sibling, sometimes to a parent.

Lydia Patterson wrote to her younger sister, Mary, "I arrived here safely this afternoon about one o-clock."

She said she went to Mrs. Wells' and the school room was in the same building as the room where she was boarding. "The school hours are from nine to 12 and half-past two, to five," she wrote. "There are five boarding with Mrs. Wells myself excepted, and about 20 schollars in all." 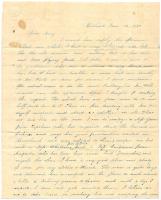 The students who had gone away from home usually commented on their boarding situation in the first letter. Later letters generally discussed studies, among other topics. Lydia, like most students writing to parents or siblings, signed her full name, first and last, belying the intimacy of the relationship.

In August, Lydia wrote to Mary that she was working on some sewing projects for her. She added, "I could very well employ all my time on my History, and Algebra, for the eight weeks begin to appear short, and I wish to go through them. I am attending to my drawing in my room, besides my regular lessons."

Students in the early 19th century studied in a variety of settings and the curriculum varied according to the sex of the student and the type of school. Portland, where Lydia Patterson attended a privately operated school for young women, also had public schools, including a high school, separate male, female, and "colored" grammar schools and primary schools.

Patterson, whose father was a master mariner, probably attended some type of school in Kennebunk or had a private tutor before being sent to the boarding school in Portland at about age 20, where she studied academic subjects, along with drawing, which was her favorite subject. She may have studied other "decorative" subjects such as needlework that often were taught to girls and young women.

In 1850 and 1851, Patterson was back home in Kennebunk, writing from there to Mary, who was then a student at Bradford Academy in Massachusetts. In a letter dated May 27, 1850, she advises Mary, age 18, on behalf of their father, to not replace a Rhetoric class she was dropping. "Father thinks if you should wish to take another, the Governmental Instructor would be a good one, but would not recommend taking another," Lydia wrote.

Mary's course of study appeared to be more formal than the one Lydia had pursued in Portland. 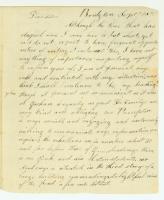 Boys, too, went away to study, although their courses were intended to prepare them for work or further study, rather than to run households. Their letters, however, often are similar. They inform relatives of their arrival at school, then of their studies.

Josiah Pierce (1792-1866), who attended Gorham Academy, wrote to his mother in April 1811, "I make out very well about my victuals and am verry well contented there are three boys from Saco board here (one of them is verry conceited) but I make out verry well) they have two little girls from Boston and one from Bath studying here we eat at stated times almost every day."

Either Pierce was quite interested in food or he thought his mother would be concerned that he was eating well.

The next fall, Pierce was at Bridgton Academy, wrote to his sister Hannah on September 26, 1811, "…our Preceptor is very sociable and engaging and extremely willing to communicate any information we require; the scholars are in numbers about 30 and far before those of G… Academy there is one Greek, and six Latin students."

In another letter, he told Hannah, "I am still studying the language in which the great Demosthenes spoke to listening Athens, & which the Godlike Socrates display'd his wisdom .. – and I am much please with it."

Pierce went on to Bowdoin College, from which he graduated in 1818.

His younger brother, George, also attended various schools for a short time before finishing at Bowdoin. In 1818, he wrote to Josiah from Fryeburg, where he was studying, and commented about reading Virgil. A year later, he wrote from Saco, "I have been to school two days and an half and hve not recited but 5 chapters. and I can say right out like a man that I do not like Mr. Hailes manner of instructing but I suppose he does as well or beter with a fillow like me than can be expected."

In January 1820, he wrote to his brother that he was "engaged in something I can never get through with that is Sallust." He added "I have gone as far as the 38th page in Bellum bottelinarum it is certainly the hardest worke I ever studied. … although I studied the hardest that ever I did, I think we have the best school we ever had since my remembrance."

The two Pierces and their sister Hannah, all of whom wrote letters about attending academies for some period, also all taught school for some time, learning from the other side of the desk what education was like.

Of teaching one year in Fryeburg, Hannah Pierce wrote that she had "upwards of forty Schollars, some of whom are wise, and some are otherwise even to an extreme." Several years later, she wrote that she was "sick of school keeping" and would give it up as soon as she found another way to support herself.

Another student, Sarah Sanborn of East Readfield, who attended school in Auburn in 1855 when she was about 12, wrote to her father in early November 1855, asking his advice about whether she should return home for Thanksgiving.

She wrote that she had asked "Mr. Woods" when the end of the term would be, an indication of the informal nature of schools at the time. Sarah then signed her letter to her father ,"Little Sonty. When he wrote back, his signature was the formal, "Your loving father, Peter F. Sanborn."

She assured him that if she went home she would "with equal cheerfulness apply myself to my books" when she returned for the final four days of the term.

In 1857, Sarah was still at an unnamed school in Auburn. She wrote to her father that she had attended a well-publicized murder trial, then got down to basics. "I think I shall like my boarding place, have not seen enough of my room-mate to tell whether I shall like her or not," she wrote. Now about 14, she signed her letter, "Your Loving Daughter, Sarah Frances Sanborn."

Her letters continued to report on various activities, her boarding arrangements, and the courses she was taking or planning to take. On Feb. 21, 1860, upon arriving in Auburn, she wrote to her father, "I take the very first opportunity I have had of informing you of my whereabouts and proceedings; I arrived safely at Auburn Depot Saturday noon … and to day have come to Mr. Strouts – So far as I can judge in so short a time, I like very much, have a very pleasant room, with a woolen carpet on the floor, a stove, and all things complete."

She discussed the cost of the arrangements, then added, "We had about 65 scholars to day but more are expected. … I have taken this term French, Latin & Arithmetic, and if you are willing, would like to take lessons in Crayon Drawing, which will be 4 dollars for 24 lessons." 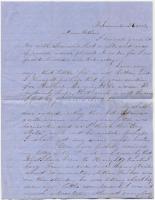 In 1861, she and her younger sister, Lizzie, then 12, were at the Maine Wesleyan Seminary and Female College. Sarah reported to their father, "Lizzie studies Arithmetic and Grammar and thinks that is all she can get along with. I study Astronomy, Drawing, Rhetoric, Latin Phase Reader, Latin Grammar …" Sarah was now about 18 years old.

In November 1862, Sarah Sanborn was back in Readfield. She wrote to her father, then in Augusta, about a lyceum paper she was giving and about the loss of one eye. "You say that I have nothing to make me unhappy to what most of girls do. I call it something to be conscious that everybody notices you on account of the loss of an eye – to be unable to study when others do -- &c. &c."

Now age 19 or 20, Sarah signed her letter, "Sarah," indicating a changed relationship with her father.

She attended Hudson River Institute in Claverack, New York, for some time, although faculty at Kents Hill wanted her to return and graduate from that school. She apparently left Claverack in 1864 or 1865, owing to a death, perhaps of her mother.

The letters home from school, of which these are a small sample, suggest the nature of education of relatively privileged young people. They went away from home, boarded either at the school or in homes nearby, and studied for terms ranging from several months to years. The courses varied from classical languages, mathematics, and literature to the arts. The boys were more likely to go on to college; the girls to return home. Educated young persons also probably spent some time teaching other "scholars."