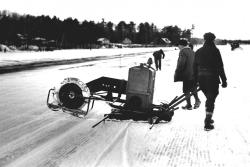 Boston merchant Frederic Tudor pioneered the ice trade in the 1810s by designing icehouses and iceboxes and sending his product to the West Indies. Other Boston merchants began shipping ice as a return cargo for the cotton they used in their textile mills.

In 1826 Rufus Page built the first large ice house on the Kennebec, and a few years later Tudor followed suit. Until after the Civil War, ice was largely a luxury item, used for cooling drinks, but when Americans added more dairy and fresh produce to their diets, ice-boxes became a standard feature in the middle-class home, and markets expanded rapidly.

Map of ice houses along the Kennebec River, 1891

In 1860 New York retailer James L. Cheeseman built several ice houses on the Kennebec, and in 1868 he sold these to the Knickerbocker Ice Company and built 12 more near Pittston.

An 1882 map printed by a Boston dealer and broker of ice showed the amount of the ice harvest that year in the state, with two-thirds of the 1.5 million ton harvest coming from the Kennebec River.

With this infusion of capital, Maine moved to the forefront of the industry. At its heyday in 1870-1890, some 25,000 men converged on the Kennebec ice fields each winter to cut and store ice. Maine’s deep lakes, broad rivers, and cold winters produced a pure, crystal-blue product that set the standard for quality nationwide, and the proximity of these ice fields to the sea lanes kept shipping costs low.

In these decades Maine’s ice returned a wealth greater than that of California’s annual gold production.

Maine’s markets depended on an unpredictable combination of hot summers in southern cities and poor ice harvests on the Hudson River, Maine’s chief rival. Because entry costs were low, profitable seasons attracted newcomers who dragged down profits in succeeding years. 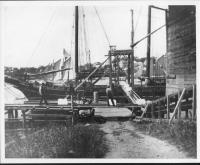 To stabilize prices, Cheeseman bought up these smaller operations and by 1869 owned some 60 companies along the river. The Knickerbocker Company, Cheeseman’s successor, controlled about a third of the Kennebec ice production by 1890, and this monopoly grew even more complete in 1891 when Charles Morse of Bath consolidated the entire ice business of the Northeast.

Morse’s American Ice Company controlled harvests on the Hudson as well as those in Maine, and when the Hudson product was adequate, he shut down his Maine operations. But by this time urban wholesalers were producing ice mechanically, and river pollution and fear of typhoid fever inclined customers toward this artificial product. Home refrigerators brought an end to ice exports in the 1920s, although harvesting continued for local purposes.

A boost to the Maine economy, the industry illustrates the difficulties inherent in all such staple industries: the seasonality of the work, the erratic nature of the market, and the vulnerability to monopoly control and technological obsolescence.

Ice harvesting on the Kennebec, 1910