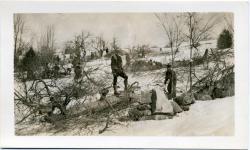 Franklin Delano Roosevelt took the oath of office as President of the United States on March 4, 1933. On March 31, he signed legislation that created the Civilian Conservation Corps, a program to employ young men and some World War I veterans in outdoor conservation tasks. The first camp opened less than a month later.

Maine's forests benefited from Roosevelt's vision as did the thousands of men who served in the 11 camps in the state.

The Maine Forest Service supervised most of the camps. Others fell under the National Park Service, U.S. Bureau of Biological Survey, and the U.S. Army.

The CCC was a popular program. It got young men off the streets and into meaningful work, and provided some education, as well as food, clothing and shelter. Enrollees performed important conservation work in the forests and in parks and enhanced recreational facilities. The CCC also gave young men a taste of military training and discipline that prepared many for service in World War II.

Maine can boast a long list of statistics of bridges, trails, shelters, erosion control, fire hazard reduction, tree preservation, and forest pest control. But the effects of the program cannot be captured in the statistics.