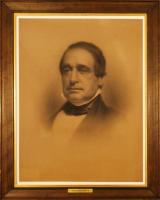 "Favored by his birth in the genius-breeding atmosphere of Oxford County in the year 1809 - the same year that Lincoln was born upon the other rim of the settled United States - reared upon a soil that has been more fertile of leaders than any similar area in the Western Hemisphere, Hannibal Hamlin experienced a most happy youth." -- Ralph O. Brewster, Governor of Maine, at the dedication of a memorial to Hannibal Hamlin in Bangor on September 15, 1927

Hannibal Hamlin, an important figure in Maine and national politics in the nineteenth century, was born and raised in Paris Hill.

During the 60 to 70 years after the small community became the county seat of Oxford County in 1805, Paris Hill boasted five Maine governors, three Maine senate presidents, three speakers of the Maine house, 12 representatives to the Congress, two U.S. Senators, one U.S. Postmaster General, and one Vice President of the United States.

Hannibal Hamlin falls into five of those categories. The vice president in Abraham Lincoln's first term, Hamlin spent most of his adult life in Bangor and Washington, D.C.

But his early life in the small farming village with lawyers, judges and politicians as neighbors, a home which became a center of activity in the community, and his frequent observations of the drama of the courtroom close by, helped form the statesman whose accomplishments are remembered 200 years later.

After 1833, he returned to Paris Hill as a visitor, to see family, announce his nomination for Vice President in 1860, and to present the town with a clock for the church bell tower in 1883.

A hundred years after his birth, thousands gathered on the common in front of his birthplace to honor his memory. Fifty years later another crowd gathered to watch a parade and listen to Margaret Chase Smith recount Hamlin’s significant accomplishments.

On August 22, 2009, residents of Paris again pulled out their bunting and mementos, invited history lovers and visitors to Paris’ historic district on the “Hill” and remembered Maine’s Vice President.