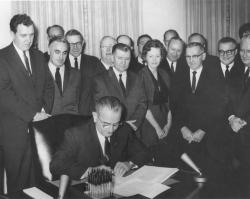 When he was elected Governor in 1954, he was the first Democrat elected to statewide office in nearly 20 years and only the second in the preceding 40 years. He later served in the U.S. Senate from 1959-1980, ran unsuccessfully for President in 1972, and was Secretary of State from 1980-1981.

Equally impressive was Muskie's record on behalf of the environment. His devotion to the cause earned him the nickname "Mr. Clean."

Assigned to an inconsequential committee in the Senate, Muskie saw an opening for tackling environmental causes and turned the Public Works Committee into a voice for clean air and clean water in the U.S.

The list of environmental legislation with which he was involved is long. He called the 1970 Clean Air Act his greatest achievement, but the 1972 Clean Water Act also was significant and struck close to home.

Pollution problems in Maine's rivers were well-known and Muskie called on his experiences in Maine as he worked on the national bill.

In an era before the environment was part of every-day conversation, Ed Muskie worked to systematically find solutions to air and water pollution.