Two historic events, the death of George Washington in 1799 and the death of Prince Albert in 1861, contributed to the rise of Americans seeking out fashionable mourning attire. After Washington’s death, the United States mourned with almost a cult-like fervor. Regimented mourning attire rules originate in this period. Following the death of Great Britain’s Prince Albert, Queen Victoria’s 40+ year period of mourning bolstered the mourning industry, and forever linked the Victorian era and mourning dress.

In 18th century New England, mourning mementos were prevalent, such as jewelry decorated with graveyard iconography, perhaps including a lock of hair from the deceased. Once confined to the British aristocracy, mourning customs expanded to everyday Americans as the 19th century progressed. As evidence of financial and social status, the strictest practices were closely followed by well-to-do upper class society, and emulated, as budgets allowed, by the emerging middle class.

During the American Civil War when death and loss were so prevalent, strict mourning practices were set aside. As the century continued, reinvigorated mourning conventions, supported through niche retail markets, verged on conspicuous consumption. These later mourning practices started to fade away in response to widespread loss during the First World War.

This mourning fashions vignette is part of Northern Threads: Two centuries of dress at Maine Historical Society, a two-part exhibition at MHS in 2022. See the mourning fashions portion, or the full exhibit online using the links below. 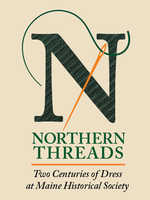