Voices of Biddeford interview with Elizabeth Mantis Spiliopoulos
on February 4, 2020.

Elizabeth "Betty" Mantis Spiliopoulos was born in Biddeford in 1921 of Greek immigrant parents. She grew up in a community where many residents were first- and second-generation immigrants from a number of different countries. She had great pride in having been a tomboy, willing to escape some of the conventions of her time. A world traveler, she always considered Biddeford home and was excited to see all the positive changes taking place. "I read an article in the Boston paper that said it was the coming city of New England."

In her interview, Betty shares stories from her parents' experiences, making the transition from Greece to Maine; similarities, differences and integration of different cultural backgrounds; first-hand accounts of what life was like during the days of the Depression; radio shows, ice boxes, World War II and Mayor "Papa" Lausier; meeting her future husband while he was stationed at the army base in Saco and the lifelong impact of his being sent overseas to serve with General Patton in World War II; dancing to big bands on the pier in Old Orchard, and what she really thought of Frank Sinatra when he performed there; and the story behind Biddeford's iconic "Alex Pizza." her brother’s business.

Recorded on February 4, 2020. Betty was looking forward to dancing at her 100th birthday party, but sadly passed during the night on September 2, 2020. 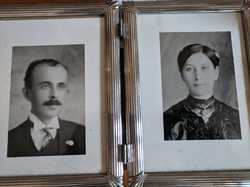 Elizabeth's father, Andrew Mantis and mother, "Bessie" Vasaliki Giannaros.
Picture was taken when they were in their twenties.

Elizabeth's father, Andrew Mantis and mother, "Bessie" Vasaliki Giannaros.
Picture was taken when they were in their twenties. 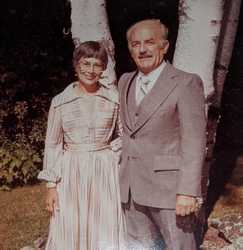