Voices of Biddeford interview with Norman Sevigny on May 11, 2019

Norm is a life-long resident of Biddeford. His mother came here from Québec, as did his paternal great-grandfather. From the time he was 10 years old, until he retired at age 70, he served the community in the grocery business. Most of that time was at Sevigny's Market, located on Bradbury Street which served the community for 48 years from 1950 to 1998. He also played a key role in the city's La Kermesse Franco-American Festival. "I never, never thought of leaving Biddeford. It's where my ancestors are. It's where I’m going to be."

In his interview, Norm shares memories of attending school at St. Joseph's. "I skipped the second grade. There were so many kids they had to switch them around"; playing football at St. Louis for Coach Bob Cote; the ethnic character of different neighborhoods; the highlights and challenges of running a local grocery store during that time; and the transition from running his own small business to working for a large chain grocery store. 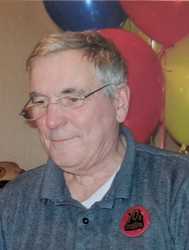 Norm Sevigny at his 70th birthday party in 2010

Norm Sevigny at his 70th birthday party in 2010 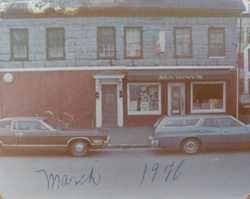 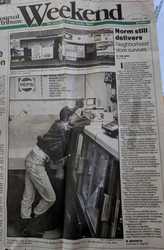