Voices of Biddeford interview with Aurore Morin and Huguette Paquette
on July 15, 2019

Aurore and Huguette were two of twelve children born into the Couture family in the Beauce region of Quebec.
Gradually, seven of the twelve children left their farming community to find work in Biddeford during the 1950s to early 1960s. Huguette arrived in Maine as a 19-year-old, while Aurore arrived later with her husband and two young children. Although they didn’t know how to speak English and only had an 8th grade education, they adapted to life in the community. Both spent most of their working lives employed in area manufacturing facilities and shoe shops. Both continued to embrace their Franco-American background and French language while stating unequivocally, that they were happy about their decision to move to Biddeford.

In this interview, Aurore Morin and Huguette Paquette share what life was like growing up on a farm as part of a large family in rural Quebec; why they decided to leave Quebec and relocate to Biddeford; what they were hoping to achieve by moving to the US; the roles their family and other Franco-Americans played in helping them adjust; and how they learned to speak English.

This interview is part of a series which provides the perspectives across three generations involved in immigration from Québec to Biddeford. To view the series, check out their mother’s (Valeda Couture) and daughter/niece’s (Nicole Morin- Scribner) interviews.

The interview, in French, was recorded on July 15, 2019. View a transcript (in English) of this interview, more pictures, and additional information. 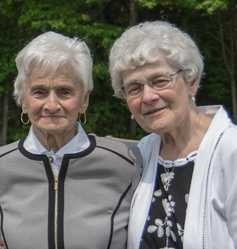 Aurore Morin and Huguette Paquette in 2019

Aurore Morin and Huguette Paquette in 2019 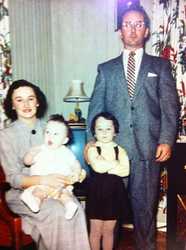 Morin family picture taken in Quebec prior to immigrating to Maine. Aurore with baby Martine, Joseph Alphonse and Nicole

Morin family picture taken in Quebec prior to immigrating to Maine. Aurore with baby Martine, Joseph Alphonse and Nicole 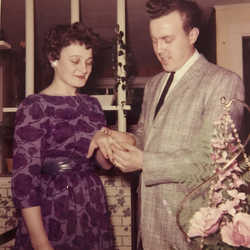