A first encounter with Bath and its wonderful history 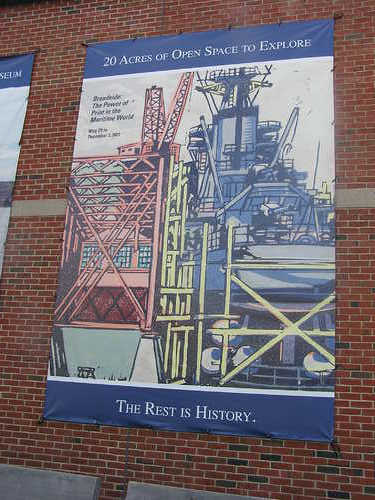 Outside the main entrance of the Maine Maritime Museum

Outside the main entrance of the Maine Maritime Museum

As a group, we headed out north from Portland by bus on I-95 and U.S. 1 - but please pardon me, I am getting ahead of myself. We - that is, the members of the Lexington Group for Transportation History - had a preview of our visit to the Maine Maritime Museum (M.M.M.) in the form of a talk given during our annual conference, on the previous day, September 10, 2021.

More specifically, Mr. Timm talked about the most memorable and spectacular thing built on the Kennebec River estuary in Bath, apart from naval ships. That thing was a 650-foot-long, six-masted coastal schooner used in the coal trade, the Wyoming. Why "Wyoming"? Because Bryant Butler Brooks, the governor of Wyoming from 1905 to 1912, put up a lot of the money to construct the wooden ship, at a time when seemingly the whole world was going over to steel-hulled, steam-powered vessels. Only twelve or so sailors were required to be the crew in the coastwise trade from Norfolk to wherever along the coast that large amounts of Appalachian bituminous coal was needed: Boston, New York, Philadelphia or Baltimore.

Huge logs, which means huge trees, were required to build the ship. The logged-over northeastern U.S., including New England, had no such enormous lumber any more, so the timber had to come from forests in Oregon. That was expensive, but no matter, the investment could be earned back from coastal schooners in six to eight years. The Percy & Small (P&S) shipyard in Bath built the vessel, with the aid of men from families with five or six generations of experience passed down from father to son, in about nine months, for a sum that, translated to 2021 dollar values, would be $4,600,000.

John B. Brooks went on the 21-day maiden voyage of the Wyoming to the Virginia Capes area. To him we owe the photographic record of that voyage; it showed that although a freight schooner, Wyoming had a certain elegance in its interior furnishings, especially the quarters for the captain and his wife. And during the construction process, many pictures were taken. The Wyoming was going to be a record-setter, and everyone knew it.

Wyoming lasted until December 1924, when a frightful storm caught it between Nantucket and Cape Cod with a full load of coal. It was lost, and all members of the crew perished.

Never before in my life had I really focused on the word "schooner." Now I knew more.

Newly armed with that knowledge, I set my hotel alarm to wake me up early the next day, and eat a Grab-and-Go breakfast in the Westin Portland Hotel’s lobby. Two groups of Lexingtonians were doing this, a red team and a green team. As a member of the latter I knew that I would have to eat quickly and board the V.I.P. bus at 8:15 for the day’s activities, half an hour after the green team’s bus departed. The two places we would be visiting needed to admit their visitors in staggered fashion so everyone would be accommodated and no one would be too crowded at either place, in Bath or in Sheepscot.

The driver of the bus took us north first on Interstate Route 95, and then U.S. Route 1, through Yarmouth, Freeport and Brunswick to Bath in Sagadahoc County. Bath is on an estuary of the Kennebec River and is famous for the Bath Iron Works, one of two sites where U.S. Navy ships are built. The other is Ingalls Shipbuilding in Pascagoula, Mississippi. Bath is well inland from the mouth of the river at Popham Beach, where Fort Popham near Phippsburg was begun in 1862 to ward off an imagined Confederate or British attack on Maine’s capital at Augusta. The BIW was thus protected from attack somewhat; at least that was the thinking in the era before military planes and missiles (the Iron Works began its shipbuilding for the Navy in 1884).

We turned south off Route 1 into the town, which is dominated to an amazing extent by the BIW, as it is called for short. The Navy’s buildings were truly enormous, reminding a person of the biggest blast furnaces in a steel-mill town. Haze gray predominates in the colors of the structures, as it does in the vessels they build.

But we went south, past that gated facility, to a remarkable museum that also faces the right bank of the Kennebec River, the M.M.M. Two hours were allotted there, and most of it was taken up with a guided tour given by a very knowledgeable docent. He took us almost immediately out through a door into an area where intense shipbuilding had taken place in the 18th and 19th centuries.

We looked out on a piece of huge and impressive sculpture: steel tubes shaped like the basic outlines, properly sized, of the vessel "Wyoming" that we had heard about the previous afternoon. It was so large that its prow extended nearly to the street, while its stern was not far from some wetlands bordering the river. Six tall flagpoles represented the six masts of the Wyoming. The sculpture stood very close to where the schooner had been built in 1909. To the left of it were two, no three buildings from the P&S shipyard era.

The real Wyoming rests forever on the bottom of Nantucket Sound. A sophisticated imaging technique detected it a few years ago, broken into pieces by a ferocious storm.

Our guide complimented us on asking very intelligent questions. He never fumbled any of his answers, even to the many queries from Lexingtonian George Bulow, who guided the Lexingtonians through New York Harbor as part of the annual meeting in Newark, New Jersey in 2015.

The M.M.M. was where we had our lunch that day. And a very pleasant occasion it was, with an option to eat outside from contents boxed in Styrofoam on a big wooden porch overlooking the Kennebec River estuary. I was joined by my friend Bob Grabarek, John Hedrick and one other Lexingtonian whose name I have forgotten. It was so pleasant that a person might almost wish it would continue for another hour and a half, but this was only one of two destinations today.

Hurriedly I looked over the remainder of the museum. On the second floor I found something that might be considered one of the symbols of Maine’s commerce and culture – wooden lobster traps. They were worth a quick picture, and then I explored the gift shop in all haste because the bus would depart soon. The many beautifully rendered reproductions of nautical charts did not tempt me; to have proper space for them in my home would have required pinning them to the ceiling.

All I could do was buy some inexpensive postcards.The museum gift shop had scads of them, each one more tempting than the previous one I looked at: one of international maritime flags and pennants; one of a painting by Robert Beck, called "the Return of the Mary E," a sailing ship; one of the Caulker's Shed, a building put up by the P. &S. Shipyard; one of the sculpture that evoked the Wyoming, a picture of which I will include here; one of the full-scale replication of the Two Lights lighthouse on Casco Bay; one of the Kramer Blacksmith Shop, used by P&S; one with five views of the Donnell House, a Victorian home occupied by a shipyard owner; one of the 1907 painting "Watching the Regatta" by Maurice Prendergast; and lastly, but maybe most memorable, a sailing card used to advertise "Snow Squall," a clipper ship built at South Portland in 1864, owned and operated by Comstock's Clipper Line, destination San Francisco.

Books from the gift ship were out of the question; I already had one book from this trip.

The Coastal Journal Edition of the Forecaster, the local newspaper, was available for free, and I took a copy. It contained no earthshaking news, and perhaps the most interesting part was the classified ads. "General help: Homewood Village Association in Yarmouth is looking for a person to plow our driveways this winter." Also: "Pick your own apples at the quiet orchard down the dirt road in the center of town: Hansel’s Orchard, 44 Sweetser Road, North Yarmouth." And just one more: "Friendly and kind Mainer with friendly dog seeks rental housing in Greater Brunswick. Responsible, honest, trustworthy single male, 52, with references. Call Matt."

That was all I had time for; the bus driver was eager to get his people loaded and leave for Alna, near Wiscasset. But that is a separate story in itself, perhaps for another time. 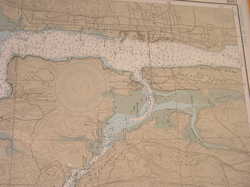 part of a nautical chart of the Kennebec River

part of a nautical chart of the Kennebec River 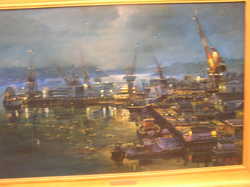 painting of the BIW during World War II

painting of the BIW during World War II 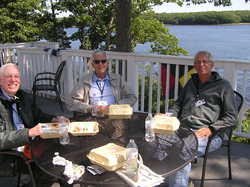 lunchtime overlooking the Kennebec River at the Maine Maritime Museum, enjoyed by 3 members of the Lexington Group for Transportation History

lunchtime overlooking the Kennebec River at the Maine Maritime Museum, enjoyed by 3 members of the Lexington Group for Transportation History