We mutually pledge to each other our Lives, our Fortunes and our sacred Honor 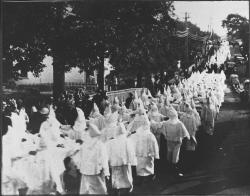 The Ku Klux Klan in Maine

The Klan in Maine rose rapidly because a charismatic leader was able to rally middle-class Protestants around their opposition to immigrants and Catholics.
—Rainey Bench, 2019

Because Maine is predominately White, it might seem out of context that our northern state hosted the largest Ku Klux Klan chapter outside of the South during the 1920s. The "new" Klan formed in 1915—a time of heightened patriotism, nativism, and anxiety about the future—based on discrimination and violence to Black people and people of color, but further targeting Roman Catholics, Jews, and recent immigrants.

"Nativism" protects the interests of "native-born" or established people of a place against newcomers or recent immigrants. Since Wabanaki people have lived in what is now known as Maine for at least 13,000 years, the philosophy of nativism in Maine's KKK movement is absurd, but dangerous. Oral histories recount Klan intimidation of Wabanaki people, including the burning of crosses in Milford, just across the river Indian Island and the Penobscot Nation.

Maine's leadership in the anti-slavery movement and large volunteer participation in the Civil War furthered the emancipation of Black enslaved people, but in the context of systemic White supremacy and intolerance, Maine has had centuries of experience with racially motivated discrimination.

The Ku Klux Klan in Maine grew in the 1920s under the charismatic leadership of F. Eugene Farnsworth. Born in Columbia Falls, he toured the state appealing for better government and stronger adherence to patriotism, Protestant values, and the Bible. By 1923, the Klan reportedly had statewide membership of 150,000, or 23 percent of Maine's population.

The Klan became less visible by 1930 with a rapid decline in membership, the emergence of the Great Depression, and several scandals involving bribery, adultery, embezzlement, and bootlegging. The robes of members might have been packed away, but the Klan never really left Maine; in 2017 the Ku Klux Klan left neighborhood watch recruiting flyers in Freeport and Augusta. 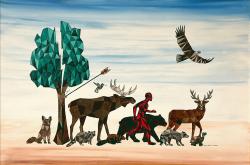 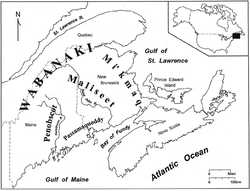 Maine is an interesting place. Anyone who has spent time here knows that identifying as a Mainer is not as simple as moving here and establishing residency. "Real Mainers" often trace their presence in the state across the number of generations their families have been here, differentiating their claim to our placed-based identity from those "from away," who are viewed as not quite fully established.

The generational heritage has also been tied to forms of work in Maine's forest or along the coast. While these notions of working the land and becoming part of it, and it a part of you, is a common theme across cultures and societies, the applications of this in Maine have also always been ethnocentric and racialized.

Part of the Doctrines of Discovery as they were applied by the English in North America recognized only the working of the land by Englishmen "improving it" as the way to truly establish a property right. Wabanaki and other Indigenous land practices were specifically excluded from establishing a property right. Similarly, the "real Mainer" category has always implicitly excluded Wabanaki people from this category, wherein thousands of years of presence on the land somehow never fit into the quaint category of a "real Mainer" claimed by so many, whose families stretched back only a few generations, not the hundreds of generations of Wabanaki presence in what is now Maine. 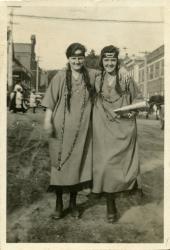 Othering through stereotypes creates a space for discrimination and violence.

In 1998, Philip J. Deloria published the book Playing Indian, revealing the many ways in which White American identities are tied to romanticized notions of Native Americans. "Playing Indian" is a part of the American mythology, allowing for both the performance of being an Indian by non-Indians, while at the same time erasing the presence of actual Indians and their actual cultures.

Deemed as "fun" and a "normal" part of American childhood, these appropriations and misrepresentations of Native people have been proven to cause psychological harm to Native children, leading the American Psychological Association to ask for the end of American Indian mascots in 2005.

Moreover, these appropriations and erasures of actual Indians have also meant that the general public largely ignores or lacks knowledge of the rights and experiences of Native Americans, who have almost no presence in American popular media. 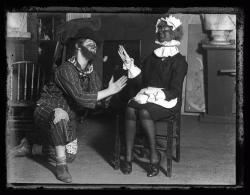 There is no more sacred honor than to see someone—to truly see them and affirm their personhood. It is the free gift that we give each other with each smile, with each meeting of the other's gaze.

The use of blackface is offensive for many reasons, the roots of which strike at the simultaneous denial and mocking of Black personhood. At this time in Maine's history—the early 20th century—Black peoples were free from the shadows but not the stain of slavery and second-class citizenship. In short, Black people would not have been present at this gathering as social equals.

Blackface is also often accompanied by caricatures of Black cultural norms and learned behavior. Undoubtedly, the audience at this play likely composed of family and neighbors, reacted favorably to what they probably considered a humorous depiction of the Black lives that they mainly saw through a social veil of "lesser than." 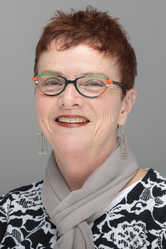 Lewiston is a typical example of le petit Canada, as are many others located throughout the state of Maine where the French settled. All classes of French people immigrated between 1820 and 1920—the elite, the professional class, and the workers destined for the mills.

Living in Little Canada meant a city-within-a-city. Survivance—Notre foi, notre langue, nos institutions (our faith, our language, our institutions) was the credo of surviving and holding onto their identity.

Le Messager, the French language newspaper in Lewiston from 1880 to 1966, kept the community connected. Camille Lessard Bissonnette was a correspondent for the newspaper, and a suffragist. Bissonette wrote about the complexities of the already arrived and the newly arriving immigrant in her book, Canuck.

The prejudices toward the French were expressed through English-only, Maine state legislation in 1916 and 1919 prohibiting French as a language of instruction in schools other than in high school language classrooms. But then, the National Defense Education Act, signed into law by President Eisenhower in 1959 due to Sputnik, stated language learning was a top priority to national security. The KKK also espoused prejudices toward the French; by 1925, Maine's KKK membership was recorded as 150,141.

Despite all of the challenges, the French heritage population is deeply woven into the fabric of many Maine communities.