Life, Liberty, and the Pursuit of Happiness

Christopher Columbus to the Pejepscot Proprietors 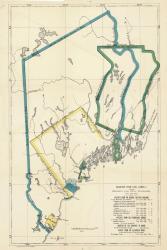 View the slideshow detailing how what is now Maine transferred from Wabanaki sovereign land to European ownership.

The place now known as Maine is—and always has been—Wabanaki Homelands. Colonization of this place was accomplished through various forms of theft and violence based on the Doctrines of Discovery and at great cost to Wabanaki people. When English people arrived in what is now known as Maine, Wabanaki leaders worked to incorporate the settlers into their social and ecological networks, to create responsible relationships, and alliances with their guests—efforts that were misinterpreted by the English as "ownership" of land.

Maine was part of Christopher Columbus's claim for Portugal and Spain. Over the next 500 years, other countries claimed parts of Maine, but it wasn't until the early 1600s that Ferdinando Gorges and John Popham, who spent years unsuccessfully colonizing Ireland, focused on Maine in the name of England.

Motivated by the prospect of economic gain from furs and timber, Gorges received a charter from King James I of England, and for more than 40 years he directed the colony's development as the self-proclaimed "Lord of the Province of Maine." Massachusetts annexed the District of Maine in 1652 after Gorges's death. Land speculation and patent companies like the Kennebec and Pejepscot Proprietors capitalized on these legacy land holdings and emphasized their connection to previous generations like Gorges to legitimize their claims. Competition and overlapping land claims were a common occurrence.

Thomas Purchase, an agent of Gorges in what is now Brunswick, Maine, ran a trading post and made real estate transactions. In the 18th century, the Pejepscot Proprietors legitimized some of their holdings by tracing the land ownership from Richard Wharton through Thomas Purchase to Gorges and attempted to reaffirm ownership through signed Indian deeds and documentation.

Massachusetts's policies and unequal relationships with Wampanoag people led to King Philip's War and the successive Colonial Wars for nearly 100 years, which greatly affected the lives of Wabanaki people and settler colonialists in Maine. During this time, land patent businesses like the Pejepscot Proprietors carved up Wabanaki territory and trading posts regularly cheated Indigenous people, adding to strained relationships. 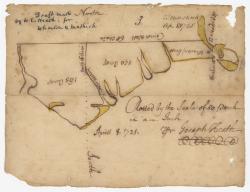 Maps and manuscripts relating to the Ulster Scots settlements in Brunswick

British leaders promoted Scottish migration to Northern Ireland in the 16th and 17th centuries. Known as the Ulster Scots or Scots Irish, they attempted to colonize on "plantations" and promoted the Presbyterian faith. Facing discrimination and violence in Ireland, the Ulster Scots negotiated across the Atlantic with Massachusetts Governor Shute to settle the frontier of what is now Maine, and to "hold back" the Native people, who had most recently wiped out English settlements along Maine's coast during King Philip's War. Ironically, the Ulster Scots came to Maine seeking religious and economic freedom for themselves, but felt no remorse at taking these rights away from Wabanakis.

Presbyterian Reverend James Woodside brought one of the first boats from Bann County, Ireland with 40 families to settle in the Merrymeeting Bay and Maquoit Bay areas of Brunswick in 1718. Woodside was the second pastor hired by the Pejepscot Proprietors to minister to locals and the Wabanaki, but the town quickly determined Woodside wasn't puritanical enough to continue preaching. James Woodside returned to England in 1720, but his son William stayed in Brunswick, running a trading post and working at Fort George.

The Woodside family lived four miles from Brunswick's town center on Maquoit Bay. There they built a garrison house that was a space for trading with Wabanaki people, and acted as a safe house for the community during the Colonial Wars. In 1727, William was convicted of cheating Wabanaki people at the trading post. Over time, William gained enough money—likely in part from overcharging Wabanakis and other customers— to purchase 350 acres of land from Bunganuc Creek to Wharton Point in Brunswick.

The Ulster Scots families who came to Maine with James Woodside planned to stay together as a community. In Brunswick the descendants of the first Scots Irish—including the Woodsides, Dunnings, Dunlaps, Givens, Simpsons, Wilsons, and McFaddens—have remained in the area. Census data confirms that per capita, Maine has the highest percentage of self-identified Scots descendants in the entire United States, and ranks third in the country for Ulster Scots descendants. 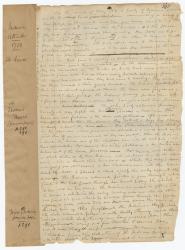 Wabanaki people tried to control illegal settlements and pushed back against encroachments into the interior, specifically after declaring that British forts were unwelcome during peace negotiations.

As a result, the homes of Ulster Scots were attacked by two parties of Wabanaki men in the Pejepscot Patent area. Thomas Means settled on Flying Point Road in Freeport. He and his infant son were killed and Molly Phinney was taken captive by one party. The other party went to Maquoit in West Brunswick and traveled across Middle Bay to the home of John Given, but "Seeing no one but children passed them unmolested." Later they encountered Abijah Young and John and Richard Starbird, and took Young prisoner.

Why was Brunswick targeted in 1756? A likely contributing factor was the increased bounties Massachusetts put on Native people—specifically on their scalps. Reverend Thomas Smith in Falmouth Neck (Portland), about 25 miles south of Brunswick noted in 1745 "People seem wonderfully spirited to go out after the Indians."

By June 1755, Massachusetts declared war against all "Eastern Indians," except the Penobscots. When the Penobscot diplomacy failed and they refused to fight alongside settlers, Massachusetts governor Phips issued a proclamation in November expanding the war to include the Penobscot Nation. By 1756, scalp bounty payouts for men, women and children approached 300 English pounds per person, equal to about $60,000 today.

Wabanaki people were being hunted in their Homelands and retaliated. 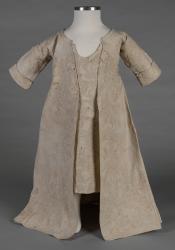 Click here to read an expanded story by Angus Ferguson and Kristina Minister.

At Falmouth Neck (Portland), the Reverend Thomas Smith, pastor of First Parish Church, responded to the call for sanctioned violence against the Wabanaki. In 1757, Smith and prominent members of the church equipped a posse of 16 men. These "scouters and cruisers" were sent to "kill and captivate the Indian Enemy" to the east of Falmouth in the area between the Kennebec and Penobscot Rivers. Shortly after, Reverend Smith noted in his journal the receipt of 198 British pounds for "my part of the scalp money"— equal to one-quarter of his salary.

Smith and other English colonists who founded First Parish Church not only organized genocide of the Native people, they strove to grow personal fortunes by populating Maine with White settlers. The 1755 Proclamation offering bounties to hunt and kill Penobscots was but one of dozens of such programs in the Massachusetts Colony's campaign of "ethnic cleansing" targeting the Wabanaki all across the Northeast region during Reverend Smith's lifetime.

The real history of how Maine came to be 95% owned and populated by people who identify as White is encapsulated in the obscured, early history of First Parish, and the profitable investment by a few wealthy church members and their pastor in the government-sanctioned, systematic dispossession, and genocide of Wabanaki people.