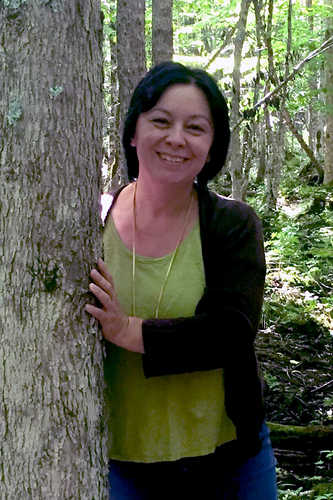 A story by Jennifer Neptune from 1755

I made this blanket coat in memory of a Penobscot family, Margaret Moxa, her husband, her two-month-old baby; and a separate group of eight Penobscot men and one child, who were all murdered by a group of scalp-bounty hunters the evening of July 2, 1755 in what became known as the Owl's Head Massacre. The accounts of that evening are horrific, Margaret begged for her baby to be spared and brought to Captain Bradbury at the Fort, instead she was forced to watch her child's murder.

Margaret had become a friend to the English women who resided in Thomaston at Saint George's Fort, making regular visits to them. The grief of the women at the fort upon learning the fate of their friend Margaret Moxa was reported in accounts to be "deep and unappeasable." The group of Penobscot men and the child traveling with them were returning from a peace conference at the fort.

James Cargill, of Newcastle, purposely led his expedition into Penobscot territory, even though the Penobscot were exempted at that time from the bounty proclamation issued in June of 1755 that targeted the Abenaki of the Kennebec region.

When Cargill and his group reported to the Fort the following day with the scalps, they were refused supplies and were reported to the authorities in Boston on massacre charges. Cargill was arrested and jailed.

In November of 1755, Lt. Governor Phipps of Massachusetts declared war and issued a scalp bounty proclamation on the Penobscot for refusing to agree to move to English forts for surveillance as the English feared Penobscot retaliation. Instead, Penobscot people living in the area moved to territories further inland for safety. Cargill was released to fight in this war, and in 1757 he was acquitted of the massacre charges by a jury in York, Maine.

In 1758 Cargill, who had kept the scalps of the 12 murdered Penobscot people, attempted to turn them in for payment. Massachusetts government debated, and ruled to deny him payment. The report stated, "And it passed in the negative, in as much as it does not appear that the said Indians were such with whom this Government was then at War."

I couldn't stop hearing her baby crying
and her anguished wails as she pleaded for life
from 31 men who had forgotten how to be human,
with hearts that hate had turned to stone.

We have stories about those who have lost their souls
Windigo, Chenoo, kíwahkʷe,
hearts of ice, with greed and hunger
that can never be satisfied,
cannibal giants, who prey on horror.

I think of the old Passamaquoddy story of the woman who was able to
turn a Chenoo back to human with her kindness, by treating him as a relative.

I wonder if Margaret thought of that story too
as she looked into their eyes for mercy and found none.

This blanket is my prayer of transformation,
Like my ancestors have done for the past 500 years
I will take the treaty cloth, the cloth of broken promises;
the silken ribbons of deception,
the glass beads of ill intent,
and like Margaret Moxa,
and those that reached out their hands before me,
I will attempt to stitch a prayer so powerful
that it creates a blanket that melts through ice veins,
and through generations with forgiveness,
so that those that hate find their hearts,
and all men turned Chenoo rejoin the human race.

May I have stitched a prayer so full of love, tenderness, and beauty
that it reaches back 266 years
and wraps the innocent in the love of the survivors;

and with such gentleness,
that it comforts the baby's cries. 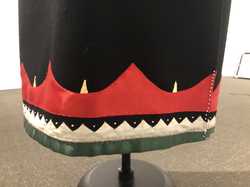