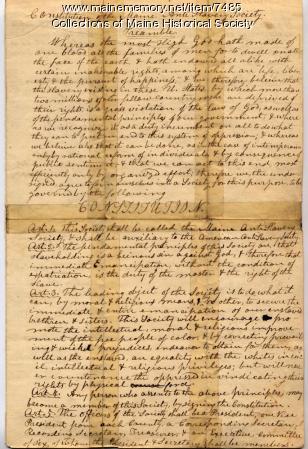 The Maine Anti-Slavery Society was founded in May 1833. While this constitution is undated, it is probably from 1833. It contains signatures of the group's members.

The constitution states that the society will "encourage & promote the intellectual, moral & religious improvement of the free people of color, & by correcting prevailing & wicked prejudices, endeavor to obtain for them, as well as the enslaved, an equality with the whites in civil, intellectual & religious privileges; but will never countenance the oppressed in vindicating their rights by physical force." 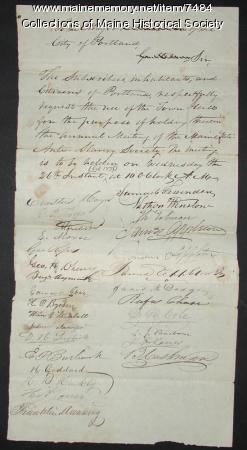 The Maine Anti-Slavery Society sought permission to use Portland's Town Hall for a meeting Oct. 16, 1836. 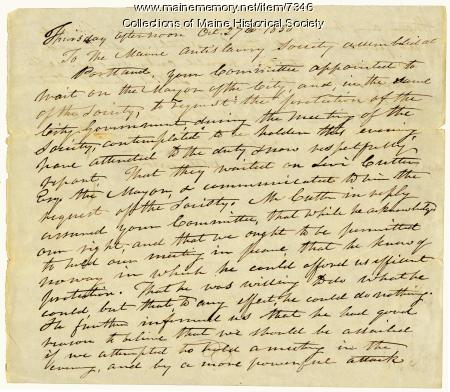 Although owning enslaved people was outlawed in Maine in 1783, broader American slavery faced little opposition in Maine until the formation of the Anti-Slavery Society in 1833. The Anti-Slavery Society's Portland group was integrated with Black and White members and included both men and women, unusual for the time period.

The Anti-Slavery Society believed slavery was a crime against humanity and a sin against God. Their moral position on abolition alienated those whose livelihoods hinged on the Atlantic slave trade, including merchants, shipping, distilleries, and mills.

In this letter, Samuel Fessenden and David Thurston recounted Portland mayor Levi Cutter's response to the Anti-Slavery Society's request for police protection during an upcoming meeting. The Mayor was willing to help, but felt police presence would, "only increase the evil, & that it was his settled belief that we could not be protected." 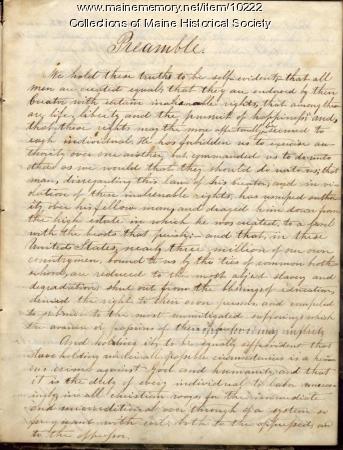 This book contains the secretary's records of the Portland Anti-Slavery Society, including the Preamble, Constitution, and organizational information. The group, formed in 1844 (an earlier anti-slavery society had existed as well) included African-Americans from the Munjoy Hill area as well as a variety of white residents of Portland. Men and women belonged to the group. In many locations, women were not allowed to belong to male anti-slavery societies.

The group followed the ideas of William Lloyd Garrison, who believed in immediate abolition and moral suasion to end slavery. The records book includes discussions of these issues as well as indications of conflict with city officials about holding anti-slavery lectures.

Because the book is 45 pages, downloading the transcription will take time. The file is 16.3 megabites. 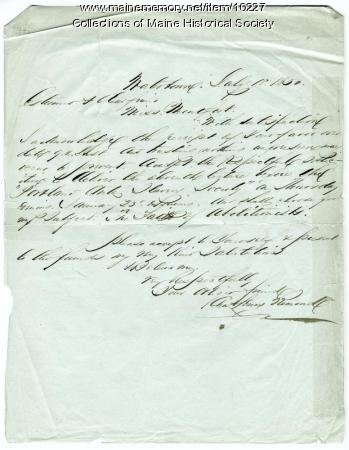 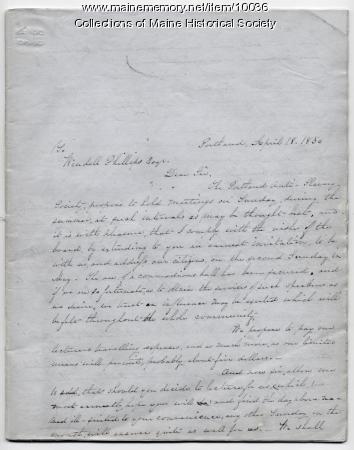 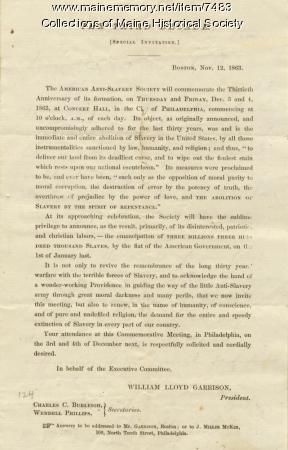 This invitation was for the thirtieth, or Third Decade, anniversary of the American Anti-Slavery Society in Boston, Dec. 3 - 4, 1863.

It was sent to Samuel Fessenden with a note from William Lloyd Garrison, Nov. 12, 1863. 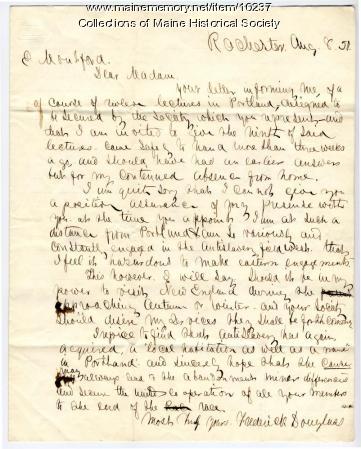 Escaped slave and anti-slavery advocate Frederick Douglass wrote to Elizabeth Mountfort, corresponding secretary of the Portland Anti-Slavery Society, concerning the society's invitation for him to lecture before them. 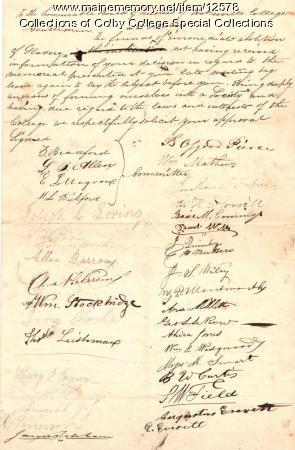 On July 4th,1833, inspired by William Lloyd Garrison's lecture in Waterville, students petitioned to establish an Anti-Slavery Society. They wrote a preamble and a constitution with 13 articles.

This petition letter is a second attempt to get approval from the Board of Trustees. It was not until 1858 that the Colby faculty permitted the formation of the society. 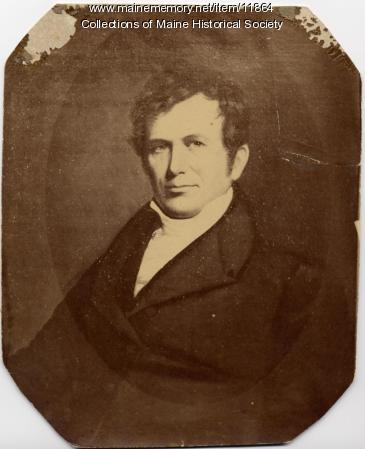 Samuel Fessenden (1784-1869) was a native of Fryeburg. An 1806 graduate of Dartmouth, he studied law and became a lawyer in 1809, practicing in New Gloucester, then Portland.

He was a founder of the Maine Anti-slavery Society in the 1830s and was a frequent speaker on topics of slavery and abolition.

He received an honorary degree from Bowdoin College in 1846.