Statehood: Attempts to Separate from Massachusetts 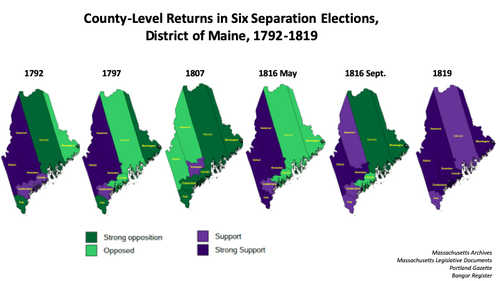 As early as 1680, residents of Maine signed a petition seeking a separation from Massachusetts. The 118 petitioners argued that Massachusetts officials obstructed their religious freedoms, and requested direct control from the King of England. Although unsuccessful, this was the first recorded attempt by Maine to separate from Massachusetts. 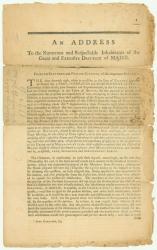 Starting in 1792, six formal attempts called for Maine’s statehood, prior to the winning vote in 1819. Motivations for separation were based on Massachusetts’s lack of military support, and the cultural differences and the economic disparity between Maine and Massachusetts.

The most common complaints were the distance Mainers had to travel to reach the General Court in Boston, and their under-representation. Taxes and a law that reduced the price of Maine lumber, allowing Massachusetts to prosper at the expense of Maine, was another source of discontent.

Maine's population increased dramatically between 1790 and 1810, suggesting Maine might be ready for statehood even though it was split politically and geographically, with inland Democratic-Republicans whose financial investments included timber and agriculture countering the coastal Federalists with interests in shipping and trade.

Maine Statehood and the Junto

Four men: William King, John Holmes, Albion K. Parris, and William Pitt Preble led the calls for statehood over nearly a decade prior to separation. Referred to by critics as the "Junto," meaning a political faction that secretly controlled politics.

Nearly thirty years after the first calls for Maine independence in 1792, Mainers were permitted by Massachusetts to vote on separation on July 26, 1819. Separation won with the overwhelming majority support of 70% of voters. Kennebec County contributed the most votes in favor of independence with places like Augusta reporting 99%, and Hancock County was the most closely divided, with 52% in favor. 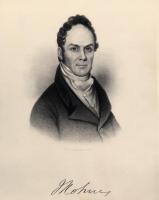 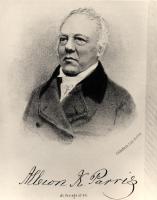 From "A History of the Law, the Courts, and the Lawyers of Maine" by William Willis

From "A History of the Law, the Courts, and the Lawyers of Maine" by William Willis

The Great Question of Maine and Missouri

After Maine's hard-won election to separate from Massachusetts on July 26, 1819, citizens awaited confirmation by Congress in December 1819. Maine's bid for statehood came at the same time the slave-holding territory of Missouri was also campaigning for statehood. 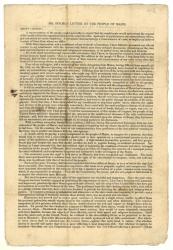 Mainers had barely survived the schisms of the vote for separation when Henry Clay of Kentucky, speaker of the US House of Representatives, offered the possibility of a "compromise" where the two requests for statehood would be packaged together—Maine would join the nation as a free state, and Missouri as a slave state to maintain a balance of free and slave states in the Union.

This presented a dilemma. Many people of Maine, who were strongly abolitionist, opposed the very bill that would give them independence. Because Maine's separation from Massachusetts would expire on March 4, 1820, members of Maine's separationist movement known as the "Junto" fought against restricting slavery in Missouri for the sake of Maine statehood, while insisting that they were not pro-slavery.

At the last minute, the bill for Maine statehood passed Congress and on March 3, 1820. Massachusetts congressmen from the District of Maine John Holmes and Mark Hill voted for, and Martin Kinsley, Joshua Cushman, Ezekiel Whitman, and Enoch Lincoln voted against Henry Clay's "compromise." Maine was admitted to the Union as a free state on March 15, 1820 and Missouri joined as a slave state in 1821. Commonly called the Missouri Compromise, this was known at the time in Maine as the "Great Question of Maine and Missouri." Because of the divisiveness it provoked, today is often called the Missouri Crisis.

Following the successful separation vote in July 1819, the Maine state constitutional convention met in Portland on October 11, 1819. According to Benjamin Vaughan of Hallowell, "the appearances of the Aurora (Borealis) were brilliant and frequent" during the writing of the constitution—a good omen.

The constitution extended to "Every male citizen of the United States of the age of twenty-one years and upwards, excepting paupers, persons under guardianship, and Indians not taxed." While the constitution provided strong protections for religious freedom, extended voting rights to Black men, and had no property requirement to vote, it disenfranchised women, the poor, and "Indians not taxed," tying representation to taxation.

Former President of the United States, Thomas Jefferson, wrote a letter to William King responding to the Maine State Constitution, dated November 17, 1819 that King had sent him for review.

Jefferson commended King, but also reminded him about the importance of political representation and democracy, noting that under Maine’s constitution, the rights of individuals were usurped by corporate towns, saying,


Equal representation is so fundamental a principle in a true republic that no prejudices can justify its violation because the prejudice themselves cannot be justified. The claims of the corporate towns in this case, like those of the barons in England have forced the body of the nation to accept a government by capitulation, these equal rights of the people at large are forced to yield to the privileges of a few.

The state constitution was approved by a popular vote in January 1820. Many White women gained the vote in 1920, and although federal law granted Native people voting rights in 1924, Maine state law did not allow it until 1953 in Federal elections and 1965 in State elections. Until Maine's Northern border was set in 1842, Acadiens along the St. John River were unsure if they were Canadian or United States citizens, and therefore were disenfranchised for 22 years.

William King was a Democratic-Republican politician who spearheaded Maine’s separation from Massachusetts and became Maine’s first governor in 1820. 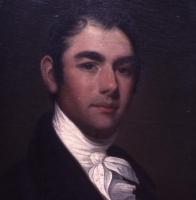 In 1819, King was named president of the constitutional convention, where political leaders drafted the Maine Constitution. That convention nominated him for governor, an office he won with 21,083 votes of the 22,014 cast in Maine’s first election in 1820.

King was born in Scarborough and later moved to Bath where he founded and was president of the first bank of Bath. He was accomplished and ambitious. King opened the first cotton mill in Maine in Brunswick, and became the largest merchant shipping owner in Maine. He funded the building of at least 14 ships and was owner or part owner of more than 35 merchant vessels involved in trade with England, the West Indies, and various ports in the United States.

Like many New England shipbuilders and owners, King's businesses benefited from the triangular trade, specifically in products made from slave labor. Ironically, Maine's economic benefits from the triangle trade were in juxtaposition to the Missouri compromise under which Maine entered the Union as a non-slave state, and the call to limit slavery in the United States. 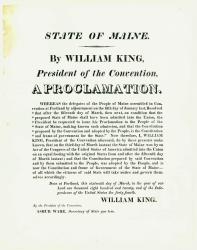 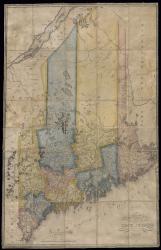 William King signed a proclamation announcing that Congress admitted Maine to the Union on March 3, 1820, that the constitution was now in effect, and that Maine was a state, "from and after the fifteenth day of March."

The capital of Maine was first established in Portland, on Congress Street, but moved to Augusta in 1832 for its more central location within the state. William King became Maine's first governor, Albion K. Parris the fifth. John Holmes joined John Chandler as the first two US Senators from the state of Maine, and William Pitt Preble served in the Maine Supreme Court.

Moses Greenleaf created a map of Maine in 1820, the same year Maine achieved statehood. It defined county and township boundaries and land ownership through color and notations. The map demonstrates the settlements and dramatic splitting up of land along Maine's coast in 1820, while the Northern sections of the state were not yet populated by non-Natives beyond the Acadien settlements.

This map pre-dates the 1842 definition of Maine's Northern border but noted the Acadien communities, showing locations of the "French and Indian Villages," and the "French settlement of 200 families." Certain tracts are called "Indian Lands" but they do not reflect the treaties and are not designated by Tribe.

The Commonwealth of Massachusetts designated tracts of land in the District of Maine for the benefit of educational institutions. Land grants were made in remote regions of what is now Northern Maine for schools such as Deerfield Academy, Bowdoin College, Portland Academy, the Saco Academy, and Williams College. The schools could sell, lease, or reap financial benefit from the natural resources on the allocated land.

Also noted on Greenleaf's map are one million acres on both sides of the Kennebec River that William Bingham purchased from Massachusetts for speculation in 1793, during a time when the Commonwealth was recouping debts from the American Revolution.

European wars over economic and political power during the 1600s to 1800s extended to North America, often putting Native people in the middle and subjecting them to colonial wars and policies. By the time a there was peace between France and Great Britain, European descendants in America were expanding permanent settlements, often violating previous treaties, and forming the United States of America. 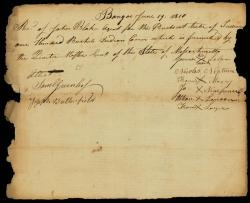 Indian corn for the Penobscots, 1810

When Massachusetts, rather than Europe, came to power, Wabanaki people negotiated perpetual payments—or treaty annuities—for permitting English-speaking people the limited settlement of land and granting resource use, like harvesting timber and food.

The Maliseet, Micmac, Passamaquoddy and Penobscot Tribes are sovereign, meaning they are self-governing nations. In 1790 the United States Congress passed the Non-intercourse Act, which limited treaty making only to the United States Congress. In 1794, Massachusetts illegally entered into a Treaty with the Passamaquoddy. When Maine separated from Massachusetts, Wabanaki people were asked to release Massachusetts from its treaty obligations and to have Maine assume this agreement, again without the involvement of Congress. However, the Passamaquoddy refused to sign the agreement. Since the late 1980s, the Tribes in Maine have been continually working to change the 1980 Settlement Act so their inherent sovereignty allies with other Tribes across the country.

Part of the articles of separation between Massachusetts and Maine included the demand that Maine take responsibility for Massachusetts’s obligations and treaty annuities to the Wabanaki. Penobscot leaders agreed to recognize the state of Maine in return for an annual distribution of treaty annuities and an affirmation of their land holdings. Although Maine received $30,000 from Massachusetts to carry out the annuities, these funds were kept in trust, and only limited amounts ever reached the Tribes in meaningful ways.

Although they were denied representation through Maine’s constitution, the Maine legislature included non-voting Tribal representatives from the Penobscot and Passamaquoddy in the early years of statehood, and the Houlton Band of Maliseets in 2010. Maine is the only state in the US to have tribally elected representatives to its state legislature, part of the unique and evolving Wabanaki-Maine relationship.