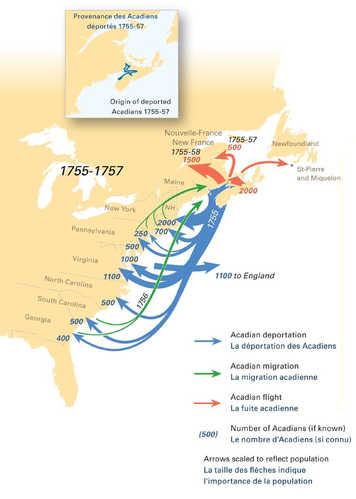 Maine Acadiens are people of French descent, whose cultural identity is directly connected with family, religion, language, and land. Acadiens are related to the first French settlers who, starting in 1604 made their homes along today’s border between Maine and Canada.

The name “Acadie” could have origins to Italian explorer Verrazzano, sailing under the French flag in 1524, who designated the region as Arcadie. While French colonization dispossessed Wabanaki people of their Homelands and later pressured conversion to Catholicism, unlike many English-speaking settlers, the Acadien-French intermarried with Wabanaki people, creating alliances to protect against the expansion of English-speaking settlements.

After the Treaty of Utrecht in 1713, Acadie was designated a permanent British possession. Great Britain insisted Acadiens give unconditional oaths of loyalty. Following their refusal, between 1755 and 1763, the British forcibly removed Acadiens in Nova Scotia and exiled them to American colonies to the south, who were hostile to French Catholics. Known as "Le Grand Dérangement," this forced expulsion and removal of over 14,000 Acadiens left approximately 7,000 dead. Approximately 4,000 Acadiens escaped by hiding with Micmac families and by traveling to Quebec. Others became captives, slaves, refugees, and asylum seekers.

When peace was finally restored by the Treaty of Paris in 1763, the remaining Acadiens were free to settle where they wished, but their communities had been destroyed, and their homes and farmlands taken over by settlers from New England. Still, many returned to their homes and settled in designated areas of Nova Scotia and New Brunswick.

When Maine became a state in 1820, the deep connections Acadiens had with Quebec and New Brunswick were challenged. When the international boundary was permanently identified in 1842, the border changed the lives of Acadiens by dividing communities that had shared families, economies, and resources across the St. John River for generations.

Evidence of the vast reaches of Acadien culture remains present in place names and Maine lore, such as Acadia National Park, and Henry Wadsworth Longfellow’s poem Evangeline, a tale of Acadie. Today, Maine Acadiens continue to live and thrive in the Upper St. John Valley, many continuing in the traditional occupation of farming.

The first permanent European settlements in Maine were French

In 1604 Pierre Du Gua Sieur de Monts and Samuel de Champlain established a colony on a small island at the mouth of a river they named Ile Sainte-Croix (Holy Cross). This was the first permanent European settlement in Maine and one of the earliest in North America.

Pierre Dugua Sieur de Monts pledged to found a permanent colony for King Henri IV of France in North America, in return for a monopoly on the region's fur trade. French traders like Sieur de Monts exchanged iron axes with Wabanaki people for furs or other materials. The Wabanaki used copper and other metals prior to contact, but worked metal was an European introduction. Because cutting with worked metal took less time than using sharpened rocks, axes like this became important and common trade items. 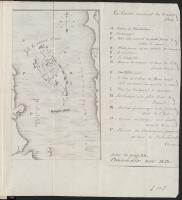 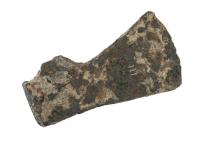 Because of scurvy, severe cold, and shortages of fuel, wood and fresh water during the first winter, the colony lost half their settlement—35 men.

In the spring of 1605, the Passamaquoddy provided the survivors with fresh food and traditional medicines. The French moved their settlement to Port Royal on the southern tip of Nova Scotia. Mathieu Da Costa, a free African who worked as an interpreter for Pierre Du Gua Sieur de Monts, joined the Port Royal settlement and is the first documented African person to have visited Acadie, or Maine.

In 1607, the King of France revoked Pierre du Gua's monopoly on fur trade activity, the colony was abandoned, and the settlers returned to France. Although both settlements were short-lived, they mark the beginnings of a permanent French presence in Maine. 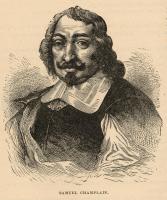 Samuel de Champlain (circa 1570-1635), was a French explorer and cartographer who began surveying what is today Maine and the Canadian Maritimes in 1603. Called the “Father of New France,” Champlain was part of the first permanent European settlement at St. Croix Island in 1604, and established Port Royal in 1605 and Quebec in 1608.

While living in the Port Royal colony in 1605-1606, Champlain explored the Maine and Massachusetts coastlines, resulting in some of the first accurate maps of New England based on first-hand surveys.

Champlain detailed capes, bays, islands, shoals, and rivers along the coast along with heights of land useful for navigation, and Indigenous settlements. Wabanaki guides helped Champlain explore parts of the coast, and provided information about the interior, where he traveled up the Penobscot River to present day Bangor in search of the mythical city of gold, Norumbega.

Only one self portrait of Champlain exists—a small drawing of a man wearing armor and shooting. All other likenesses imagine what he looked like.

During an expedition to establish the Northeast boundary of the United States, Robert Pagan testified about his exploration of ruins on Doccas Island (St. Croix Island), the remains of the 1604 French settlement established by Pierre du Gua Sieur de Monts and Samuel de Champlain.

Pagan reported evidence of architectural structures, fire pits, bricks, and,
a Metal Spoon, a Musket Ball, a piece of an Earthen vessel, and a Spike Nail, all of which gave evident Marks of having Laid a Long Time under the Surface.

At the time of this deposition, a commission was determining the "true" River St. Croix to establish the international boundary between the United States and Canada, proposed by the Treaty of Paris in 1783. Pagan's discovery of the fort remains determined that the St. Croix Island was located on the "true" St. Croix River, but also worked to dispossess Passamaquoddy people of their Homeland, and split Passamaquoddy and Acadien communities with an invisible political line. 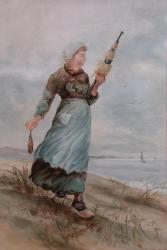 Acadien refugees from "Le Grand Dérangement" who returned to Nova Scotia in the 1760s and 1770s found their former homes occupied by American settlers called “New England Planters," and were forced to search for other suitable areas of settlement. They chose the mouth of the St. John River and called their village “Ste-Anne-des-Pays-Bas."

Their peaceful life was destroyed in 1783, when 12,000 Loyalist soldiers and their families immigrated to New Brunswick after the American Revolutionary War. In 1785, a group of Acadiens petitioned the New Brunswick government for land in the territory of Madawaska. They settled on both sides of the majestic St. John River, in long lots, measuring up to two miles, with frontage on the river.

When Maine became a state in 1820, its Northern boundary was not established. Ambiguous wording about the boundary between the United States and British North America (Canada) in the 1783 Treaty of Versailles disputed ownership of the forests and logging rights. These issues were argued until a compromise was reached during the Webster-Ashburton Treaty, which declared the St. John River the international boundary between Great Britain and the United States in 1842.

Evangeline, A Tale of Acadie

"Le Grand Dérangement" of 1755 was a mass deportation that displaced and split up Acadien families and communities. British soldiers burned homes and forcibly removed Acadiens from New Brunswick, sending them to ports all along the Eastern Seaboard of the United States and to Europe. Most were imprisoned and thousands died.

Henry Wadsworth Longfellow’s poem, Evangeline, A Tale of Acadie published in 1847, tells the story of Évangéline Bellefontaine's quest to find her fiancé Gabriel Lajeunesse after they were separated during "Le Grand Dérangement."

Though Longfellow’s poem Evangeline is a fictitious portrayal, Evangeline herself has become a potent symbol of Acadien persistence.

Écoutez encore, c'est la vie de l'Acadie française en 1955, deux siècles après la mort qu'on prévoyait. (Listen! It is the sound of the heartbeat of French-speaking Acadie in 1955—two centuries after it was supposed to have been extinguished.)
René Lévesque, Radio Canada, 1955 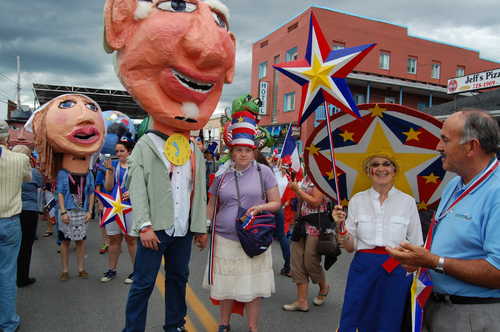 Every August 15, on National Acadien Day, descendants of Acadien settlers march in Tintamarre (pronounced tantamar, from the French Acadien word meaning noise, or din) parades, where they play whistles, horns, bells, clappers and even pots and pans to make noise, to show their presence and to restate, "We’re still here."

Parade participants wear outfits based on the Acadien flag with colors of blue, white and red, with a gold star. In some communities, giant puppets and the grosse tête are worn in a carnival-like atmosphere. 2014 marked the first time three Acadien regions of New Brunswick, Maine, and Quebec joined together in Madawaska to demonstrate their common Acadien cultural identity, drawing about 10,000 participants.

The French Diaspora in Maine
By Lise Pelletier, Director of the Archives Acadiennes, University of Maine Fort Kent

Maine's Franco Americans are descendants of two large groups: Acadiens and French Canadians who immigrated to the state and New England in the 19th Century. While both groups initially shared French ancestry, a common language, traditions, the Catholic religion, and history, each evolved differently in the New World.

Acadiens were the first to found a permanent settlement in the New World, on Ste-Croix Island, Acadie, in 1604, preceding the founding of Jamestown in 1607 and of Québec city in 1608. The colonies of Acadie and Québec grew independently and very differently from each other. Most notably, the Acadiens of Nova Scotia were forcibly removed by the British from their homeland in the 1750s and exiled to colonies to the south, thus creating the Acadien Diaspora. During this ethnic cleansing, however, approximately 4,000 Acadiens escaped the "Le Grand Dérangement” by fleeing to the woods or making their way to Québec. Many Acadiens thereafter intermarried with French-Canadians.

After the Treaty of Paris in 1763, some Acadien families of Quebec moved to the lower St. John River and eventually to the Madawaska Territory in 1785. French people of the Upper St. John Valley are descendants of those Acadiens and of French Canadians who joined them in the early 1800s. Together with other Franco-Americans, they share a common 20th Century Maine history, a love of traditional foods such as cretons, tourtières, ployes, tarte au sucre, a strong sense of community and family, and a hardy work ethic.