The Northeast boundary of the United States was disputed territory between the United States and Canada starting after the American Revolutionary War. Both countries sent teams of surveyors and appointed commissioners to determine the boundary between what is now New Brunswick, Canada, and Maine. Although the surveyors employed Wabanaki people, Indigenous rights to the territory were not considered, nor were the repercussions of splitting Acadien communities along the St. John River. 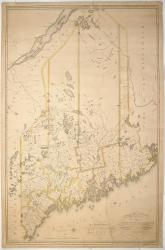 Moses Greenleaf's map of the District of Maine, 1815

Moses Greenleaf created maps of Maine prior to, during, and after statehood. Greenleaf was an advocate of Maine statehood, and his maps provided government officials and citizens information about Maine’s geography and resources, contributing to the pro-separationist movement.

Survey expeditions to interior and Northern Maine informed this 1815 map. The fanciful depictions of rivers, mountain ranges, and lakes seen on earlier maps are instead informed by data. For the first time, Moosehead Lake is shown in its entirety and Katahdin—the state’s highest mountain—appears.

Greenleaf’s suggestions for the Northeastern boundary illustrated the confusion over exactly where Maine’s borders lay. In his 1829 publication, A Survey of the State of Maine, Greenleaf stated,


The Northern boundary is formed by the highlands which separate the waters falling into the river St. Lawrence, from those which fall into the Atlantic ocean, and extends from the north-west angle of Nova-Scotia, to the sources of Connecticut river. These boundaries on the east and north separate Maine from the British provinces of New-Brunswick (formerly Nova- Scotia) and Lower Canada; and form the frontier of the United States as far as they extend. As no actual survey has yet taken place to define and mark these boundaries in their whole extent, it cannot be expected to determine with accuracy the precise area of the State.

Maine's Northern Border is fixed after the Aroostook War 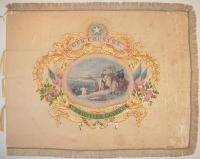 Known as the “bloodless” Aroostook War, this diplomatic incident between Great Britain, Canada, and the United States occurred without battles, and ended with Maine finally realizing a fixed Northern border.

The Treaty of Paris in 1783 established the border between the United States of America and British colonies after the Revolutionary War. The area around Madawaska, including parts of Maine, New Brunswick, and Quebec, remained in dispute. Acadien and American locals declared this unresolved borderland "République du Madawaska" or the Republic of Madawaska, which existed from 1827 to 1842. 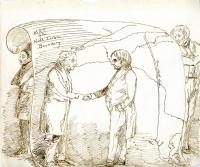 Click here to learn more about the Webster-Ashburton Treaty

In the 1830s, Maine’s attempts to collect census data and the questioning of British settlers and their timber industries settling into the St. John Valley during 1826-1830 furthered tensions between the two countries.

Baker's actions set off a slow-moving diplomatic incident, leading to unproductive arbitration by the King of the Netherlands in 1831. By 1838, a rush of American and British troops occupied the borderland.

US Secretary of State Daniel Webster and British diplomat Lord Ashburton negotiated the Webster-Ashburton agreement on the Northeast boundary lines of Maine, New Hampshire, Vermont, and New York. They reached a compromise in 1842, establishing Maine’s border with Canada, luckily coming to an agreement before any actual battles.

Much of the dispute involved the timber economy, and many Maine citizens were disappointed, thinking Webster had compromised the interest of Maine and the nation.

Click here to view artwork from the Talcott Survey

The Talcott survey, headed by Captain Andrew Talcott, mapped the Northern boundary of Maine after hostilities broke out in 1839 between settlers in the Madawaska region around the St. John River.

Artists accompanied the survey and used an apparatus called a camera lucida. By using a glass prism suspended over a sheet of drawing paper, the camera lucida projected an exact outline of the view onto the paper, which could then be traced.

The original 16 paintings from this expedition are in the National Archives, Washington, DC.