1620 Charter from King James I

The first documented European visitor to Maine's coast was Italian explorer Giovanni da Verrazzano, who in 1524 heard tales of "Norumbega", a mythical city of gold and silver on the banks of the Penobscot River. This legend of riches made Maine a beacon for explorers, racing to discover fortune.

By 1605, English-speaking people—including Ferdinando Gorges—understood that the wealth of Norumbega was not gold and silver, but furs, fish, and timber. Gorges received a charter from England's King James I, and for more than 40 years he directed the colony's development as the self-proclaimed "Lord of the Province of Maine."

Gorges was a leader in the Plymouth Company, a land speculation or patent company, created to promote non-Puritan settlement. Unlike later patent companies, such as the Pejepscot Proprietors, Gorges never sought to negotiate land transfers and deeds with Native people.

Ferdinando Gorges, Wabanaki captives, and the colonization of Maine

Ferdinando Gorges (1566-1647) was a wealthy English nobleman who sponsored expeditions, such as George Waymouth's 1605 explorations of Maine. After failing to discover a Northwest Passage, Waymouth instead kidnapped five Wabanaki men at Pemaquid: Sassacomoit, Tahánedo, Skicowáros, Amóret, and Mannedo—and brought them to Gorges. They were likely the first Wabanaki people to set foot on English soil.

Three Wabanaki men lived with Gorges, his wife Ann, and their sons, age 10 and 12. Gorges learned the language of his Wabanaki captives, taught them English, and listened as they described the people, geography, and resources of their Homeland. Gorges hatched a business plan with his friend, John Popham, based on fur and timber trade and English settlement in Maine.

A Spanish ship intercepted an English vessel carrying Mannedo and Sassacomoit back to Maine in 1606. Mannedo was lost at sea and Sassacomoit was put in Spanish prison, significantly delaying his eventual return to Maine until 1614.

In May 1607, Gorges sent two ships to establish a colony in Maine. George Popham, nephew of John Popham, was aboard as president of the colony; along with his assistant, Raleigh Gilbert, a son of Sir Humphrey Gilbert, and 120 "planters." Guiding the trip was Skicowáros, who was charged with persuading Wabanaki relations to trade with the English. But the mistrust fostered by Waymouth’s kidnapping doomed the Popham Colony.

Coupled with pandemics, European settlements in the Americas were catastrophic for Native populations, wildlife, and the environment. From 1492 to 1600, up to 90%, an estimated 56 million Indigenous people in North and South America died, disrupting human relationships with the environment. With no Native people to tend the fields, trees and other vegetation reclaimed huge expanses of land previously used for agriculture, especially in Central and South American societies. As a result, enough carbon dioxide was removed from the atmosphere to actually cool down the planet. During this period, the Thames River in London consistently froze over, and harsh winters and cold summers across the globe caused famines and wars. 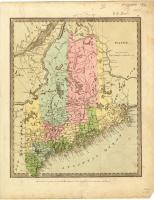 Click here to see an exhibit about how Maine's borders evolved

Borders are human designed lines that define states and countries. Although they are invisible, they are powerful when enforced. The shape of Maine has changed over time, reflecting settlement, international treaties, wars, and military actions. Each change has had severe consequences for Wabanaki Tribes and Acadien communities whose families are—even as of 2020— split between the United States and Canada.

As a district of Massachusetts, Maine had little say about how the wars fought between England and France affected the state’s international borders. After the Revolutionary War (1775-1783), attempts to set Maine’s Northernmost border were slowed by a lack of understanding of the topography, with surveyors and mapmakers sent by both the United States and Canada to explore the region.

During the War of 1812, questions over international trade, the occupation of Eastport, and allegiances of Mainers were challenged. Even after statehood, Maine’s Northern border wasn’t fixed for another 22 years, until the end of the Aroostook War in 1842.

Motivations for Maine's separation from Massachusetts: The Coasting Law of 1789 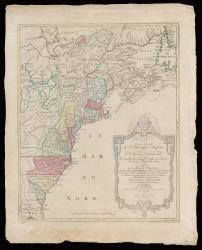 Click here to see items about the Coasting Law

After the Revolutionary War, the newly formed United States of America enacted a Coasting Law in 1789, requiring trading vessels to enter and clear customs at the border of every state they passed between their port of departure and their destination.

Vessels were exempted in states with adjoining borders to another state where they were registered. As part of Massachusetts, Maine’s borders included New Hampshire, Rhode Island, Connecticut, and New York. Being part of Massachusetts had an enormous economic advantage under the Coasting Law, therefore residents living in York County and in port towns such as Portland, Bath, and Machias generally opposed statehood during the early attempts by separatists to put the possibility to a vote. The Coasting Law was revised in 1819, which helped pave the way toward statehood in 1820.

Motivations for Maine's separation from Massachusetts: The War of 1812

Calls for Maine’s Separation from Massachusetts were delayed when the United States entered into war with Great Britain in 1812. Known as the War of 1812, the conflict began when the British interfered with United States shipping, and forcing American sailors–sometimes entire crews–into the British navy. 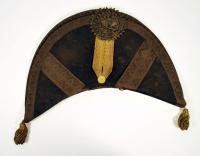 Click here to see items relating to the War of 1812

In July of 1814, British troops began occupying Eastport, Maine—a lucrative shipping port they claimed was part of their territory. Great Britain attempted to regain their former land, advertising for peace in New England newspapers and suggesting a plan calling for the annexation of Eastern Maine to Canada. Some conservative Massachusetts Federalists seemed ready to agree to these terms. Although it did not come to pass, the willingness to sacrifice Maine became a major rallying cry as separationists reorganized at the end of the war.

The War of 1812 ended in early 1815, but Eastport continued to be under British control for another four years. In 1818, Eastport was the last American territory occupied by the British to be returned to the United States. Except for the brief capture of two Aleutian Islands in Alaska by the Japanese in World War II, it was the last time that United States soil was occupied by a foreign government.

Prior to the war, Mainers had been divided on whether to pursue independence from Massachusetts. The negative experiences with the War of 1812 and the ambivalence of Massachusetts toward Maine’s suffering accelerated the process that led to Maine’s separation in 1820.

The 1813 naval battle of the Boxer and the Enterprise 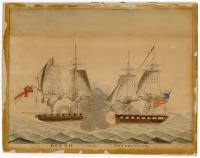 Maine's coastline and proximity to British Canada made the province a target during the War of 1812.

On September 5, 1813, the battle between the U.S. Brig Enterprise and the British Brig Boxer took place in the waters off Monhegan Island.

The Boxer's commander, Captain Samuel Blyth, 29 years of age, was killed in the opening exchange of cannon fire. On the Enterprise, Captain William Burrows, age 28, was mortally wounded a short time later. Burrows would not consent to being carried below until the end of the engagement, after which he accepted the British surrender.

The captains are buried side by side at Portland’s Eastern Cemetery.