The Village Cafe - A Place We Called Home 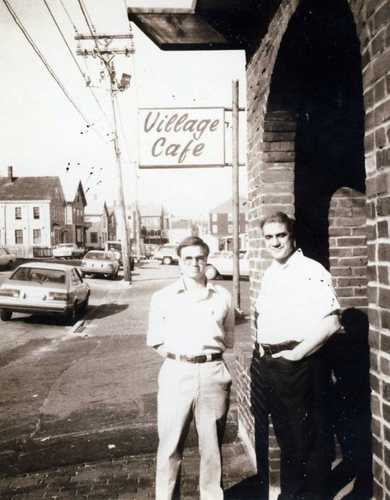 It's July 21st, 2019, and it's 95 degrees with high humidity. In a desperate attempt to keep cool, I started thinking about some of my colder experiences across time, and the thoughts of dinners at The Village Cafe in the middle of winter crept to the forefront of my mind. "The Village" was more than a restaurant, it was where my family met outside of the home.

My pop was known to go there after work and watch the games while having a beer, but it wasn't just him. My grandfather, Charlie Ritchie, worked for the railroad, and he would stop in there for a beer after work, just to let the rush hour traffic diminish enough for him to make a journey to his home on Coyle Street. My mother, her friends, and I would stop in for a meal here no less than once a week throughout the 1980s, both before and after the renovations that changed the very soul of this beloved neighborhood nucleus. Pop would often be there waiting for us, between newscasts, catching up on the scores and having a beer with the regular crew there, fondly referred to as "The Village People." Guys like George Gilman, Jake Rice, Eddie Willard, and, of course, John and Amadeo Reali. These were not just patrons and proprietors, they were family.

Pop used to get a free trip each year to go watch the Red Sox during spring training, down in Clearwater, Florida. It was through Tripco Travel, and they would advertise it as getting to go to spring training with him, as a draw. The first year they did that promotion, all "The Village People" came. They ran out of beer somewhere over the Carolinas. When they arrived in Orlando, a tour bus picked them up and drove them around the area, giving them a guided tour of the region. Informational reports by the tour director were met with quips, such as, "Does anybody here know how dry I am?" Clearly the travel agency did not take into account the liquid needs of their parched patrons.

And I've noticed that I've been sidetracked from thinking about cool thoughts. That's what family will do, I guess - guide you into your memories through one door, and then redirect you, all day long, if you're not careful. I can't help reminiscing about pulling up to the door, dropping the adults off, driving around the lot two or three times before either finding a spot or saying the heck with it and finding a spot on the street, and then sprinting like an Olympian to get out of the cold. The only companion those of us who parked the family cars could count on was the rhythmic thump coming from the factory next door - chick cha chunk, chick cha chunk - and George Gilman's pink Cadillac (the one he bought from Amadeo). Oh man, but wasn't it all worth while once you opened that second set of doors, stepped inside the old entry way (the one that had the two pay phones on the far wall) and the first thing to hit you was the amazing variety of familiar smells...the bread...the red sauce...the clam sauce. "The Village People" were holding court at the end of the bar, and it didn't matter that there was a 30 minute wait and it was standing room only in the waiting area. At that moment you'd felt like you'd just come home, and no one was ever in too much of a hurry anymore (except for the waitresses, some of whom we'd known for years and years).

I always looked at the menu, but from 1980 until they closed I never needed to. I always ordered the veal parmigiana. I know that it's hyperbole, but there really was none better! Milestones or regular meals, I always lied to myself every time I even glanced at the menu. My meal selection was a foregone conclusion before I even walked through the door. And don't even get me started on how amazing their red sauce was. Mom and I went there twice the last week they were open for business. We bought a quart of red sauce to bring home after our last meal there. It lasted less than a week, but I can still close my eyes and taste it.

There's never been another place that evoked such a comforting, home-like atmosphere like The Village Cafe, and while I miss it like I miss a departed loved one I also consider myself incredibly fortunate to have those experiences stored away as cherished memories. There really will never be another Village Cafe, because it could no more be replaced than any other member of our family could be replaced. Amadeo is gone, most of "The Village People" are gone, most of my family is gone, and The Village Cafe is gone too, razed and replaced by condominiums. But when I think about my family, it's not long before memories of them at "The Village" manifest. It wasn't just where we went to celebrate, it was a big part of where we all lived. 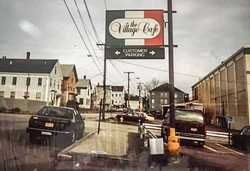 The Village Cafe, after the 1984 renovations. To the right you can see the factory that is now home to the Shipyard Brewery.

The Village Cafe, after the 1984 renovations. To the right you can see the factory that is now home to the Shipyard Brewery. 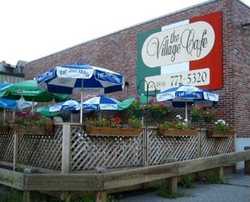 The Village Cafe, back deck

The Village Cafe, back deck