Wabanaki people have been making baskets for thousands of years, continually innovating while simultaneously fostering traditions. Basketmaking today is about making art, stewardship of the environment, preserving cultural heritage, commitment to family, pride in identity, and honoring spiritual connections. 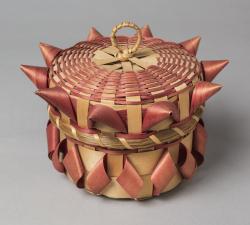 By the mid-1800s, colonialism changed Wabanaki lifestyles. Paired with loss of access to traditional lands, the Wabanaki were left with few resources. Enterprising Native people began making and selling baskets in order to survive, modifying utilitarian forms to fit Victorian tastes, and the rise of a new genre of basketmaking—fancy baskets—evolved.

From the 1870s to the 1930s, basketmaking boomed as Wabanaki people connected with tourists in resort areas like Bar Harbor, Poland Springs, and on the reservations. By 1900, basketmaking was the primary source of income for many Wabanaki families, supporting an independent way of life that mirrored traditional mobility of traveling to the coast in the summers to sell baskets, and inland in the winters.

Brown ash is integrally tied to Wabanaki creation histories and the tradition of weaving baskets. With the Emerald Ash Borer beetle and climate change threatening ash trees in Wabanaki territory, questions about sustaining culture without a plentiful supply of ash arise. Wabanaki artists are exploring, and creating traditional basket forms with alternative materials, like cedar, metal, wool, and plastic. 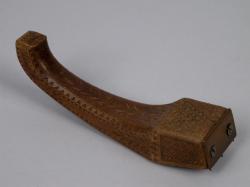 Tools of the basketmaking trade

Until around 1990, artists didn't sign their baskets, and the collectors usually didn’t record the names of the artists. Historically, tourists didn’t view the baskets as artwork, but rather as a memento of a nostalgic encounter with another culture, to recall trips to places like Bar Harbor or Indian Island, or as décor and useful objects in the large summer “cottages” on the coast.

Weaving knowledge, techniques, and tools are handed down through families. Within the Tribes, specific basket forms and designs are designated as familial heritage. By the mid-1880s, new technologies improved the manufacturing of tools like wood splitters, gauges, and blocks for holding a basket’s shape, which helped Wabanaki basketmakers create smaller and fancier baskets. The introduction of commercial aniline dyes in the 1860s allowed for a brighter and more varied basket color palette.

The Business of Baskets 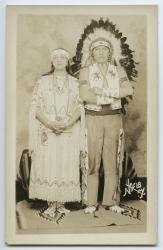 Making baskets is a communal and intergenerational activity. The weaving of a basket is the end product of months of gathering and preparing materials.

Lucy Nicolar (1882-1969) was a nationally-known performer and businesswoman. A member of the Penobscot Nation, she grew up on Indian Island.

Nicolar, a mezzo-soprano, performed as “Princess Watahwaso” and recorded with Victor Records. Lucy Nicolar met and married Bruce Poolaw, from the Kiowa Tribe of Oklahoma, while they were traveling across the country performing on the theater circuit. In this photograph, they are dressed in Plains-style regalia from Bruce Poolaw’s Kiowa tribe.

Nicolar returned home to Indian Island with Poolaw after the 1929 stock market crash. Together, they opened Chief Poolaw's TeePee in 1947, a tourist destination store that featured Penobscot artwork. In 2019, the TeePee is a small museum dedicated to the Nicolar family, run by their descendant, Charles Shay. 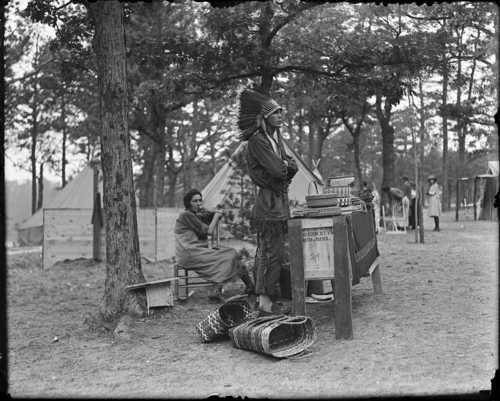 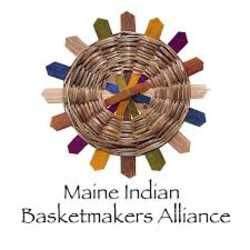 The Depression, World War II, changing demographics, and the shifting tourist market contributed to a decline of basket making in the mid-twentieth century. Dedicated basket makers continued weaving despite the economic challenges, and were instrumental in forming the Maine Indian Basketmaker’s Alliance (MIBA).

In 1993, a group of 55 basket makers from the Maliseet, Micmac, Passamaquoddy and Penobscot tribes formed the Maine Indian Basketmakers Alliance to save their own endangered art of ash and sweet grass basketry. By working together, MIBA lowered the average age of basket makers from 63 to 40, and increased numbers of artists to more than 150 through a series of inter-tribal workshops, apprenticeships, and markets. Pairing cultural and economic practices in their programing has continued to be central to their success.