The culture hero Gluscabe’s (also Glooscap, Gluskabe, Klooscap) teachings are passed down from generation to generation through oral histories, language, and songs, ensuring mutual responsibility and obligation between human and non-human beings. 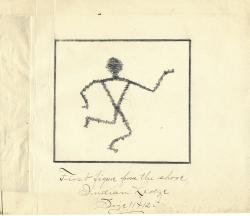 Forced assimilation and diminishment and extraction of natural resources dramatically changed the ways Wabanaki people accessed and used the environment they had depended upon for thousands of years. The Maine Indian Claims Settlement Act of 1980 restored a portion of the traditional land base. Since then and today, Wabanaki are once again supervising decisions about ecological stewardship based on TEK/IK.

Gluscabe’s oral histories teach the reciprocal relationship between people, animals, and the environment. Wabanaki people recounted their oral histories about the origin of animals (including humans), landmarks, and the way people live the region now known as Maine to author Charles Leland, who published them in 1884.

Passamaquoddy artist Tomah Joseph illustrated Leland’s book, Algonquin Legends of New England or Myths and Folk Lore of the Micmac, Passamaquoddy, and Penobscot Tribes. Many stories recount the consequences of over harvesting or hoarding resources,

Tomah Joseph was a respected artist, culture bearer, and an ambassador for Passamaquoddy people. He worked as a guide on Campobello Island where he met and befriended a young Franklin Delano Roosevelt, future president of the United States. 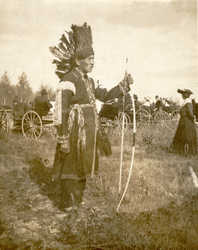 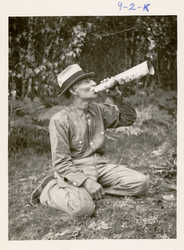 The River To Which I Belong

View documents about conflicts over resources

Wabanaki leader Polin travelled from Maine to Boston in 1739 to protest the damming of the Presumpscot River, on which his people depended on for sustenance. Meeting Governor Jonathan Belcher, Polin said he desired “only that a place may be left open in the dams so that the fish may come up in the proper seasons of the year.” In return, he offered to continue to share space with settlers, with certain restrictions.

Polin was protesting the great dam that Colonel Thomas Westbrook, a military leader and the King’s Mast Agent, was building to support a growing colonial logging industry. Polin observed that the dam blocked the vital fish runs on the “river to which I belong.” Governor Belcher ordered that Westbrook “leave open a sufficient passage for the fish…in the proper season.” But Westbrook defied the order. In order to protect the fish and the river, Wabanaki people targeted dams, mills, and upriver settlements for the next 17 years.

The Friends of the Presumpscot River have successfully promoted river and salmon restoration since 1992, pushing for fish passageways and dam removals in Falmouth and at Saccarappa Falls in Westbrook. They created a memorial in Westbrook in 2018 noting Polin as, “the first advocate” of the Presumpscot. 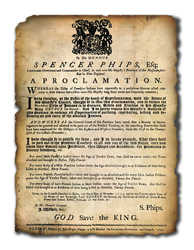 To secure land for English settlement, Massachusetts offered bounties on Native people in the early 1700s—specifically on their scalps. In June 1755, a Declaration of War against all Eastern Indians—except the Penobscots— was released. When the Penobscot diplomacy failed and they refused to fight alongside settlers, Massachusetts governor Phips issued this proclamation in November, expanding the war to include the Penobscot Nation.

The proclamation is genocidal, providing settlers freedom in “pursuing, captivating, killing, and destroying all and every” of the Eastern Indians. Bounties for scalps ranged from 20 to 50 English pounds for men, women, and children of any age. By June 1756, the Massachusetts assembly voted to raise the bounty to 300 pounds per person—equal to about $60,000 today.

Originally used as a tool for sanctioned violence, today, by making the Phips proclamation visible to the public, Wabanaki people are reaffirming their rights.

Fishing on the Androscoggin

English settlers in Brunswick noted the Androscoggin's abundant fish runs. In 1673, a commercial fishing operation at Pejepscot Falls took 40 barrels of salmon and more than 90 kegs of sturgeon in three weeks' time. 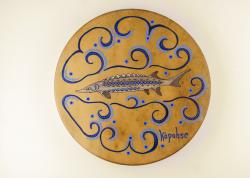 For the Wabanaki, the fishery was hoarding, and caused an imbalance with the fish populations. In 1737 residents of Brunswick petitioned Massachusetts to maintain Fort George, since they claimed the Wabanaki, “look upon us as unjust usurpers and intruders upon their rights and privileges, and spoilers of their idle way of living. They claim not only the wild beasts of the forest, and fowls of the air, but also fishes of sea and rivers, and so with an ill eye looks upon our Salmon fishery, and no doubt would disturb our fishers were it not under the Immediate protection of the fort.”

By the early 1800s, mill dams in Brunswick, Topsham and Lisbon Falls had destroyed the Androscoggin River's fish runs. In 1816 the last Atlantic salmon was seen at Great Falls in Lewiston.

19th and 20th century mill operations dumped waste into the Androscoggin, and extensive dams further degraded the water. The Clean Water Act of 1972 regulated pollution levels. Today, the Androscoggin River is clean enough to support several fish and wildlife species, but not subsistence consumption of them. 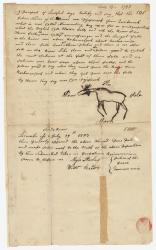 Pere Pole was an Abenaki who lived with his family and community on the Ameskonti (Sandy) River—current day Farmington—when English settlers arrived in 1780. Pere Pole had served in the American Revolution and owned 100 acres in Strong.

Pere Pole was deposed as part of a land dispute against the Commonwealth of Massachusetts. After having his honesty and character vouched for by English settlers, Pere Pole was allowed to testify.

Pere Pole identified the fishing activities and names of the different sections of the of the Ammoscongon (Androscoggin) River. He shared the Wabanaki names of Quabacook (Merrymeeting Bay), Amitgonpontook (the falls at Lewiston), Rockamecook (the corn planting grounds at Canton and Jay Points), and that Atlantic salmon ascended the river in great numbers as far as Rumford Falls. His signature is a moose.