English is the foreign language 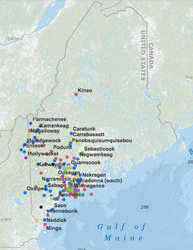 Wabanaki languages are the first language of Maine. The original words of this land—Casco, Katahdin, Kennebec, Androscoggin, Pemaquid, moose—surround us.

Abenaki, Micmac, Maliseet/Passamaquoddy, and Penobscot languages are part of the Algonkian language group, and each Tribe has a distinct language that expresses worldview. The names they use to describe themselves are evocative of their place in Maine:
Mi’gmaw (Micmac) – my kin-friends
Panawahpskewtəkʷ (Penobscot) – river of white rocks opening or spreading out
Peskotomuhkatiyik (Passamaquoddy) – people who spear pollock
Wolastoqewi (Maliseet) – people of the beautiful river

As settlers colonized Maine with a dominant English language system, they named towns after their founding fathers or English homelands, resulting in a situation where Wabanaki people are now living in a deeply familiar place, populated with foreign words.

Wabanaki children were at times forcibly removed from their homes, and were not allowed to speak their languages. Tribal members left the reservations for educational and employment opportunities to cities like Portland and Boston, where they raised families. As a result, generations of Wabanaki people grew up not knowing their language. Language revitalization and school programs in Wabanaki communities have brought languages back from the brink of loss. 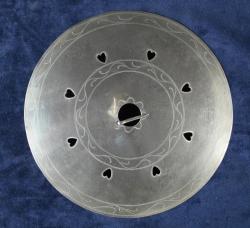 The Wabanaki have maintained a nation-to-nation relationship with the United States since the inception of the country. Wabanaki people fought alongside colonists in the American Revolutionary War, but the US Congress never ratified agreements between the colonies and the Wabanaki. As Wabanaki people lost their legal appeals, state and federal agencies attempted to assimilate Wabanaki people—and their large land holdings—into the dominant white culture.

Micmac, Maliseet, and Passamaquoddy communities were split by the establishment of Maine’s international border between the US and Canada. Countries claiming Wabanaki territory fluctuated, along with the border line, for about 60 years— starting roughly with the Treaty of Ghent in 1783 and ending with the Webster-Ashburton Treaty that resolved the Aroostook War in 1842.

Wabanaki people have dual citizenships in their Tribal nation and the United States. Indigenous citizens are the only people in America that do not have to relinquish their national citizenship to also be a US citizen. While most Tribes in America have requirements for enrollment, the Tribes are not all recognized by the federal government. 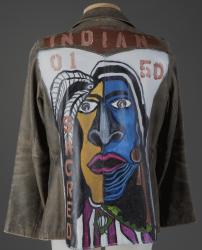 The four federally-recognized Tribal Nations in Maine have always had a form of internal government. They maintain Tribal governments, community schools, cultural centers, and manage Tribal lands and natural resources. Tribal councils govern the Nations, with an elected Chief (also called a governor) as the head of the executive arm of government. In the past, the post of Chief was hereditary.

The Houlton Band of Maliseet Indians is comprised of 1700 members as of 2019, and led by elected Tribal Chief Clarissa Sabattis. They received federal recognition in 1980. Since then, they have built a tribal center on their lands along the Meduxnekeag River near Houlton. Many Maliseets refer to themselves as Wolastoqiyik, "people of the Saint John River."

The Aroostook Band of Micmac Indians has 1240 members, and is led by Chief Edward Peter-Paul as of 2019. They received federal recognition in 1991 after a long process of research and petitions to the US government. 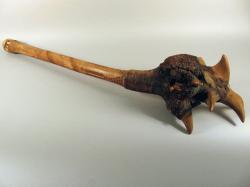 The Passamaquoddy Tribe has two reservations in Washington County and 3369 Tribal members. Motahkokmikuk is located 50 miles inland at Indian Township and as of 2019 is led by Chief William J. Nicholas Sr., and Sipayik is on the ocean at Pleasant Point led by Chief Marla Dana. The Passamaquoddy continue to inhabit their ancestral homeland 400 years after European contact. They received federal recognition during the 1970s after the Passamaquoddy v. Morton case was affirmed on appeal in 1975.

Penobscot Indian Nation is one of the oldest continuously operating governments in the world. There are 2398 Penobscot Nation members, with tribal headquarters at Indian Island, in the Penobscot River near Old Town. As of 2019, they are led by Chief Kirk Francis, and received federal recognition during the 1970s after the Passamaquoddy v. Morton case was affirmed on appeal in 1975.

There are many Wabanaki people living throughout Maine, as well as non-federally recognized Abenaki people.